Bonk 3: Bonk's Big Adventure is, as you can probably guess, the third entry in the Bonk series. While it was released on the standard HuCard format in both Japan and America, the latter also received a release for the Super CD, featuring redbook audio and extra minigames. 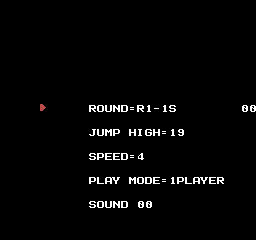 Debug mode in this game is enabled by highlighting Quit at the title menu, holding Down, Left, I, and II, and then pressing Run.

ROUND, obviously, is Round Select. The level order is a little wonky, and exits don't quite work properly on some stages.

PLAY MODE switches you from 1- or 2-Player.

SOUND is the sound test.

The 1 and 2 buttons decrease and increase values, respectively. Left and Right can be used to play sounds in the Sound Test. Run starts the selected level. Select starts that level with invincibility. Hooray!