A Lumbricus terrestris in a robotic suit faces off against the likes of a mad scientist with a simian fused into his crown, an alien made of snot and a hideous queen with a gigantic gastropod mollusc for buttocks.

It could only be Earthworm Jim, or perhaps one of its sequels... 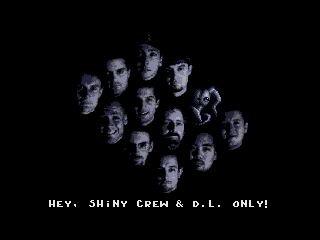 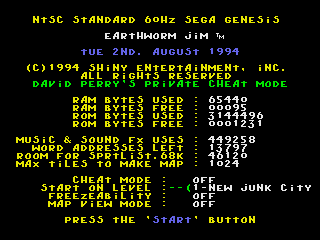 A debug mode still exists in Earthworm Jim. It displays information about how much memory is used by the game, as well as its build date. During game play, pause the game and enter the following code: Left + A, B, B, A, Right + A, B, B, A.

A screen showing the Shiny Entertainment staff will appear as Jim called the player "Cheater!", followed by the debug menu.

The PAL version of the game was built three days after its NTSC counterpart.

This string can be found in the ROM: