A Lumbricus terrestris in a robotic suit faces off against the likes of a mad scientist with a simian fused into his crown, an alien made of snot, and a hideous queen with a gigantic gastropod mollusc for buttocks.

It could only be Earthworm Jim, or perhaps one of its sequels... 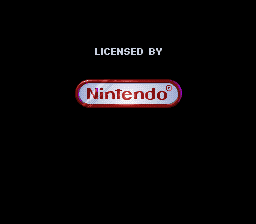 Graphics, a tilemap, and palette exist in the ROM for a "Licensed by Nintendo" screen. Since the graphics are the first thing loaded in VRAM during several of the opening screens, and the Genesis version has a similar SEGA logo screen, this was likely intended to be the first thing shown upon startup.

There is also enough black space below the logo for the animation of Jim flexing. The animation was moved to the copyright disclaimer, which is actually the first screen to appear in the final version.

A similar screen would later appear in the SNES version of the sequel. 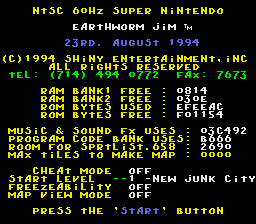 During gameplay, pause and press Left + A, B, X, A, A, B, X, A, Start. A screen showing the Shiny Entertainment staff will appear, followed by the debug menu.

Pausing and entering Y, A, B, B, A, Y, A, B triggers a weird sequence in which a message for Nick Jones, one of the game's programmers, is displayed, informing "him" that this is the "old cheat code". The five goofy faces displayed in the background are presumably Nick himself. The text is as follows: