The sequel to Earthworm Jim takes the weirdness and cranks it up to 11. It's long, it's frustrating as hell, and it has no real password system...but overall, it's one of the best games of the 16-bit era. Well done, Shiny. 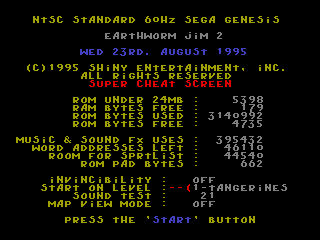 The game contains a debug mode nearly identical to that of its predecessor which also displays information about how much memory is used by the game, as well as the build date. To activate it, pause the game and press A, C, C, A, B, A, B, Left.

The European version of the game was built eight days after its US counterpart. The cheat screen's title was also changed between regions.

This may have been meant to be used in a screen similar to the one featured in part one, but entering the code takes you directly to the Cheat menu, so it is never shown.