The GBA version of Earthworm Jim 2 is a, shall we say, unfortunate port of the SNES version...but at least it has a working password system this time around. 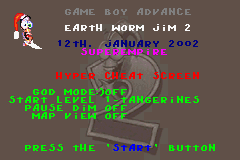