Friday Night Funkin' is a rhythm game originally made for Ludum Dare 47, later growing into a larger-scale project. It's basically a mix of PaRappa The Rapper and Dance Dance Revolution with funky, hiphop inspired art. 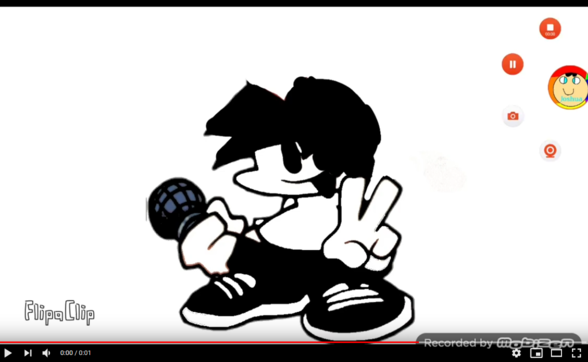 assets/images/zzzzzzzz.png is a screenshot of a YouTube video showcasing an "OC" known as "Joshua", which is really just a recolored image of the boyfriend's peace sign pose with no hat. Evidently, it was left in as a joke, judging by both its filename and the general nature of the image. It originated from this.

assets/images/lol.png is a screenshot of a chat message from one of Ninjamuffin99's streams, featuring a user saying "ADD ME IN THE GAME PLEASE". Obviously a tongue-in-cheek joke from the developer.

iconGrid.png contains two sets of icons that are unused in the game, each with a "normal" icon and a "defeated" icon. First one is a grey face likely used as a placeholder or template for icons. The second set is for Tankman, one of Newgrounds' mascots, and an upcoming playable character who is yet to be added. 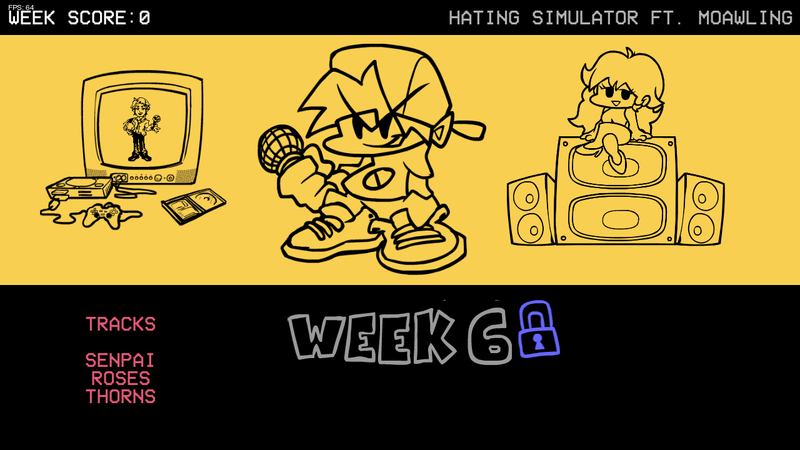 In the stage selection spritesheet, a lock graphic is present. In really early versions, Week 2 was unable to be played until Week 1 was completed. 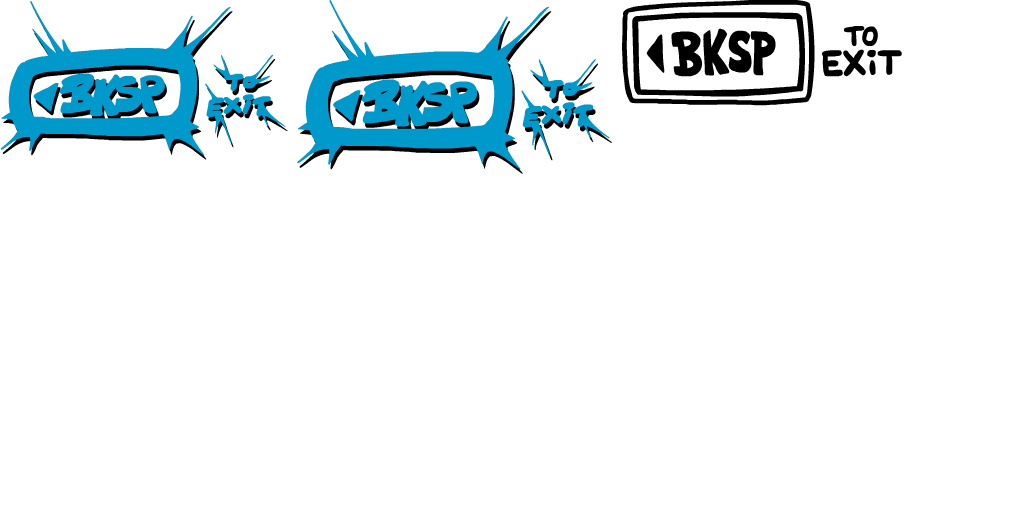 A graphic that explains how to exit a menu. It's left over, possibly because it wasn't as useful. 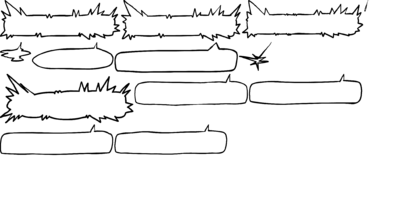 In assets/images/speech_bubble_talking.png are speech bubbles not used in-game. The developer has stated he wants to provide more story to the game, and such has been the case in Week 6. Since that week has a unique art style, these graphics are yet to be used. 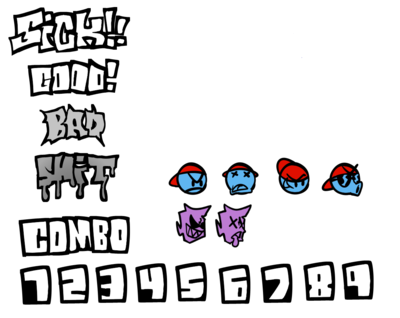 In assets/images/grafix.png has earlier versions of the point and ranking graphics along with early icons for Boyfriend and Daddy Dearest. This file is also present in the Ludum Dare prototype, but is also unused.

In assets/images/screencapTierImage.png is another random screencap, this time it's a 4chan post. 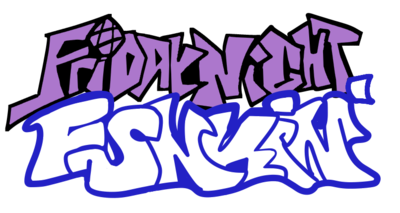 The old logo from the Ludum Dare prototype. 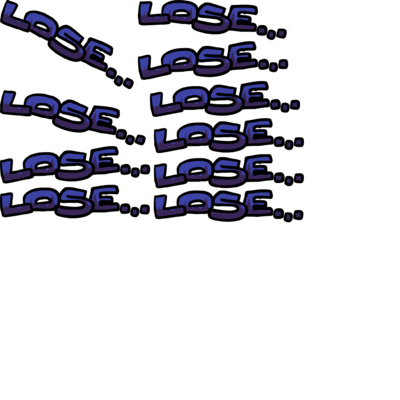 Restart? and Lose texts respectively. Also coming from the Ludum Dare prototype, where both were used in a now cut death screen. It looked like this: 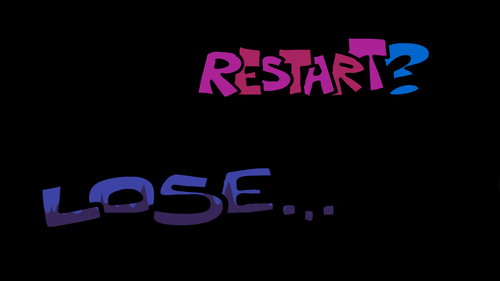 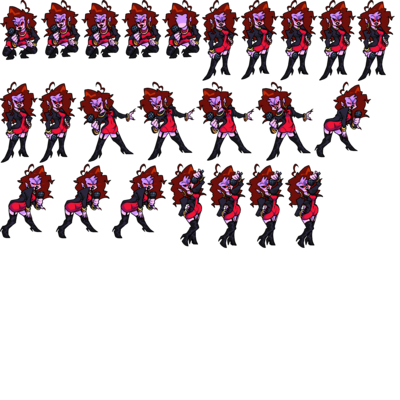 When the Week 4 update was released, the Mom used this sprite sheet, named Mom Assets.png. Even when the Week 5 update brought along a new sprite sheet were her hair flutters in the wind, the old Mom sheet was still in-game, completely playable via the debug menu.

assets/images/BOYFRIEND.xml contains some unused animations for the boyfriend attacking and dodging an enemy's attack.

The boyfriend preparing his attack.

The boyfriend attacking using his microphone.

The boyfriend dodging an incoming attack. 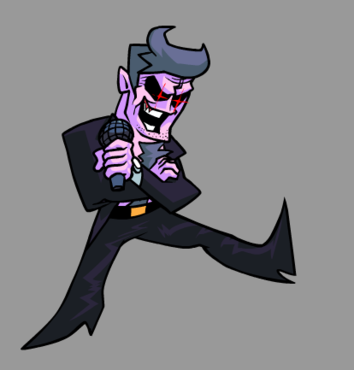 A unused sprite of Daddy Dearest kicking something.

In assets/images/GF_assets.xml, the girlfriend also has her fair share of unused animations.

An animation for the girlfriend with a happy expression raising one of her arms up. This animation appears in a Newgrounds teaser trailer for the game, so it might be a leftover from that.

While technically used, this animation for the girlfriend's hair blowing left never plays fully in-game because of how fast the train passes by her.

An animation of the girlfriend ducking for cover. Was supposed to be used in week 4, where you'd have to duck down to dodge a streetlight.

An animation of the girlfriend ducking for cover, but with her hair blowing like it does in week 4.

An animation of girlfriend dancing to the beat, but her hair falls in a way that looks like she's landed on something.

In the same teaser trailer, Pico was teased as a playable character. As of the writing of this article however, Pico only ever appears as an opponent on Week 3. As such, these animations for him missing a note input go unused, since the AI never misses. However, in the Week 5 update, these sprites can be seen in-game if the player puts their character as "pico" instead of "bf", "bf-car", "br-christmas", or "bf-pixel".

Amusingly, the filename for his spritesheet has a typo in it (assets/images/Pico_FNF_assetss.xml, "assetss" rather than "assets").

On Week 5 Girlfriend gets dressed up in Christmas themed clothing. She has some leftover animations from the normal version, such as the note animations.

The unused cheer animation makes a return in Christmas form.

The fear animation that is used when lightning strikes in Week 2 makes an appearance. The legs and arms in this aren't changed for Christmas.

The note animations from the Tutorial can be found. The hands not being changed for Christmas is recurring for the note sprites.

The up note was technically used; however, it was only via a small bug which resulted in her, the boyfriend, and the opponent starting in their up position.

This WIP level features a creepy-looking entity known internally as "monster". It has a black scribbly body, a wide smile, and a lemon for the head. The song is unique in that it is the only song in the game with meaningful lyrics − it goes on about how the monster plans on eating the boyfriend and girlfriend. Although the lemon monster does appear in Week 5, his sprites from monster weren't updated.

The note chart for this level is finished but bugged, as is some of the monster's animations.

A really short level, probably used for testing. It appears to be broken. According to one of the developers, the music was supposed to be Break the Targets from Super Smash Bros. Melee (hence, the name).

A level with no music and only a note chart. However, it is supposed to have music, which from the note chart was figured out to be "Kouta Takahashi - Urban Fragments" from the Ridge Racer Type 4 OST (Which explains the level name). It appears to use Daddy Dearest as the testing character. In a tweet from November, PhantomArcade, the main FNF artist posted a video of the song in action, confirming that it was indeed a test song. 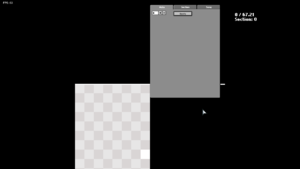 Press 7 while in any level to access the debug menu. The most useful and noteworthy part of this debug menu is the ability to place and remove notes from the current song and play them. The four left-most columns of the editor belong to the AI and the four right-most ones belong to the player. Just like in-game, the column order is left, down, up, right.

W / Up arrow and S / Down arrow scroll the note chart up and down. This can also be controlled with the scroll wheel. A / Left arrow and D / Right arrow will change the section of the song being edited. Holding down CTRL while placing a note will copy the note to the other side of the chart. Q and E change the most recently placed note’s sustain length. Spacebar plays a preview of the song on the editor, to help with timing notes. Enter will play the current note chart in-game, with any edits done.

Allows changing the sustain length of the most recently placed note. Attempting to change the length without placing a note in the current section will cause the game to crash.

The text is the name of the song it will try to load. Save will save the current note chart into a JSON file, Reload Audio reloads the audio, and Reload JSON resets the settings of the song (?). Ticking Has Voice Track off will disable the vocal track in-game.

Its purpose is currently unknown.

A test song. It also has a vocal track, but it's just complete silence.

A test sound, possibly used for keeping the beat.

The girlfriend making various beep-y noises. Possibly meant to be used for the tutorial, instead of using "up", "down", "left", and "right".

Present in assets/images/custom_chars/charlist.txt. The folder name suggests it is going to be used in the future for adding custom characters to the game. The folder, alongside the text itself, was later removed, but the template icons are still there.

Present in assets/data/main-view.xml. Most likely a testing button as buttons like these aren't supposed to appear in-game.

There's an options menu in the game that can be re-added to the main menu by replacing it with the donate button, that originates from a pull request on the game's Github page. The only option is for keybinds, however the feature is currently unfinished and will simple freeze player inputs if attempted to change a keybind.

There are mod folders in the root folder and in the assets folder. Currently non-functional.

Dialogue for Tutorial and Week 1 tracks

Found in the game's publicly available source code, in the file PlayState.hx is dialogue for the Tutorial and all tracks for Week 1, thought to possibly appear like Senpai's dialogue in Week 6, but in the unused textboxes left in the files.