Game Genie code 16C-749-B3E will allow you to select an additional pause animation directly after the final disco ellipse animation. Press B again to reset to the first.

A lot of surprises in here.

Two out of three blocks that comprise the locked Ball game panel are used.

An unused lowercase font. The Credits names are in all-caps for both the Cast and Staff Rolls.

Toad grabbing or hanging onto something?

Ball might have been a last-minute addition, as there's quite a few unused graphics. Game Genie code ??A-04C-E6A (where "??" is one of the below) will access some of these elements, although it'll cause graphical glitches outside of Ball.

What appears to be a Conch shell. ID 09.

An unused sprite of Bowser where he appears to be wincing, as if he lost.

There is a full tilemapping for a mostly completed Peach Stage. A Mode Select icon also exists hinting that a Modern Ball stage for Peach was planned. Game Genie codes 911-37B-A20 911-78B-A20 C21-34B-F75 will allow you to access the remnants of the Peach Stage. A few graphical glitches aside, it works as it should.

Three of the cookies from Yoshi's Cookie. The "Check" cookie has two parts used for animating the ball-like object. The "Flower" and "Circle" cookies also have both a single stationary and animation set, but neither would display in-game. Game Genie code ??A-04C-E6A (where "??" is one of the following) will replace the "Check" cookie with either "Flower" (09) or "Circle" (10).

Here is the complete tileset for a Peach stage, which is rendered before each stage's tilemapping.

Hell, the interrupt save was entirely programmed.

GameShark code 010202C2 or Game Genie code 021-61A-E6A will allow you to access Very Hard mode in all classic games. While the games are mostly completed and the interrupt save graphic was completely programmed, there are a few problems:

Present in all Game Boy versions, and can be accessed with Game Genie code 0F1-EEF-B3A or the debug menu (see below). It is unknown when this title screen was scrapped, probably early on as the Game Boy Color features were added as the monochrome US version was released...although it's interesting that Game Boy Color palettes were implemented for this title screen as well.

Pressing Start takes you to the normal title screen.

While not as extensive as the debug menu of Game & Watch Gallery 3, there's still some usable stuff in here. 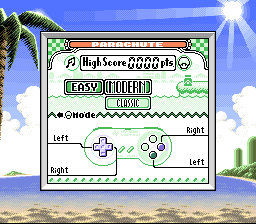 When Game & Watch Gallery 2 was localized to the US, the SNES controller's A and B-button palettes were not changed to reflect the US blue and purple buttons. Rather than update the palette completely, they forgot to update the attraction attributes, leaving the original code assigned to the palettes visible.

This can be seen by exploiting a Super Game Boy BIOS palette glitch which involves clicking on the camera icon in the custom palette menu, then wait for the palettes to change, and exit the menu with L and R buttons.

Game Boy Color support was added outside Japan as well as an early US version released in extremely small quantities, but the Japanese version of the game has never received a Game Boy Color upgrade and was rediscovered as part of the September 2020 lotcheck leak. The Australian release was known as Game Boy Gallery 3, due to Game Boy Gallery being the first title in the series.

The messages feature a quaint border around the top in the Japanese version.

Due to different regions getting different versions of the game, the same applies to the Virtual Console release. Japan got the original Game Boy version, whereas everyone else got the Game Boy Color version. The Japanese release is locked in Game Boy mode, so Super Game Boy borders are inaccessible, and international versions are locked in Game Boy Color mode, so both the Super Game Boy borders and monochrome Game Boy mode are inaccessible.