Gundam: Battle Assault is the sequel to the Japan-only Gundam: The Battle Master, featuring a mishmash of Universal Century and After Colony characters.

"Wealth and glory to the winner!" 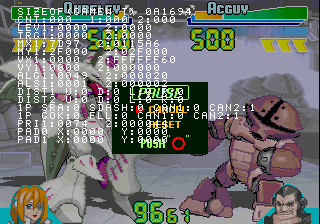 The game received numerous changes during localization, the big majority being purely aesthetic. Most changes were made to capitalize on on the Gundam franchise's massive explosion in popularity overseas.

The game was renamed from Gundam: The Battle Master 2 to Gundam: Battle Assault, and the graphic of Zeta Gundam behind the title screen was replaced by Wing Gundam along with a generally lighter, more clearer colour. The European version also features a language selection.

The game also plays an opening sequence after 20 seconds into the title screen in the Japanese version not seen in the international versions.

Japanese versions of the game include the mobile suit Hamma Hamma from Mobile Suit ZZ Gundam, while the English version replaces it with Wing Gundam, the eponymous mobile suit of Gundam Wing fame. Sadly, Wing is just a spriteswap of the Zeta Gundam.

Additionally, the entire roster of pilots consists of game-original characters in the Japanese version, while the English version replaced them with the appropriate pilots from the wider Gundam franchise.

The entirety of the game's story has been rewritten. The Japanese version follows Gloria and Pixie as the protagonists while the international ones feature an original story about Heero Yuy of Gundam Wing fame trying to bring about peace by...destroying everyone else's mobile suits.

Every location briefly displays their name during story mode in the Japanese version, something the international versions doesn't do.

Every pre-fight scene features basic information about the opponent pilot (name, sex, age and occupation), as well as larger profile portraits than what's seen in the English release.

Gloria and Pixie's winpose portrait differs depending on how much health they have after winning the battle. Heero lacks any kind of winpose port in the English release.

There are 3 intermission cutscenes during the story and one before the final fight. These are missing from the international versions.

The ending scene was trimmed down while the credits and post-credit scene were completely cut.

The spelling in some mobile suit names was slightly changed.

The cheat code to unlock Zaku II Commander Type differ between regions, both commands still need to be input during the title screen.