SD Kidou Senshi Gundam 2 is one of roughly a million Gundam games on the Super Famicom, and one of a handful to be based on the SD Gundam line that started in 1985.

Summary: Cute little Gundams blow each other up. Again. 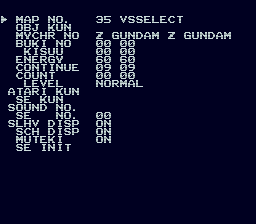 Use the Pro Action Replay code 80B40724 to access the game's debug menu after the copyright screen.

Note that several of the values on this screen aren't initialized on boot, so you'll have to set them to sane values yourself. Items with two values are modified using both controllers. 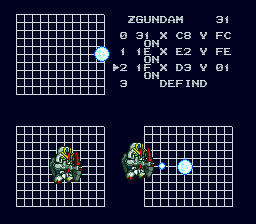 This screen allows you to view various ingame sprites, as well as to arrange up to four sprites on screen in any position.

The top line represents the current object and frame number (with frames 00 to 1F being the same for all objects.) Press A to edit these values; Left/Right moves the cursor between the object name and frame number, and Up/Down changes the value. The currently selected frame is displayed in the bottom left corner.

To return to the debug menu, reset the game. 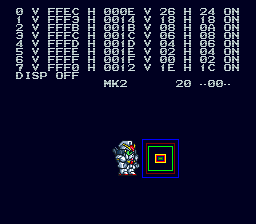 This screen allows you to view individual frames for an object. The bottom line of text lets you select an object and frame; press A to edit, Up/Down to select an object, and Left/Right to select a frame (as with the previous screen, the first 32 frames are the same for each object.)

The lines marked 0 through 7 allow you to draw assorted colored boxes on screen. Use Left/Right to enable/disable individual boxes, press A once to edit a box's position, and A again to edit its size. These always have all values set to zero initially and don't seem to represent anything important (such as hitboxes.)

As with the previous screen, reset the game to return to the debug menu.

An unused, alternate configuration screen for VS battles can be accessed by setting the map number to 35 (VSSELECT) in the debug menu. 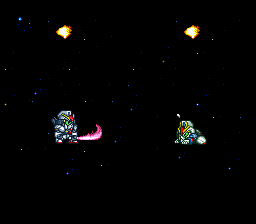 The first screen lets you select between "S" (for "space") or "E" (for "Earth", which is actually one of the space colonies) in a rather showy fashion using the D-Pad. Pressing B returns to the debug menu.

Pressing A goes to the second screen, where both players select their Mobile Suit using Up/Down and human/CPU control using Left/Right (which is indicated by the sprite above either player.) Pressing B from here returns to the previous screen, and pressing A begins a VS battle, then returns to the debug menu.