Leisure Suit Larry 3 is an interesting entry in the series as it has the player control two different characters (Larry and Patti) over the course of the game.

It's also well-known for ending in such a way that Al Lowe had no idea how to continue the story for 4 - until he hit upon the idea to skip it and do 5 instead. 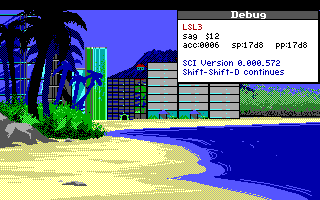 As with any other early SCI game, hold down both Shift keys and press the - key on the numpad at any point during the game. To exit this mode, press Shift and D.

At any point during the game, open up the text prompt and enter ascot backdrop and go to a different room. The following actions can be entered in the text prompt:

There are also some game state modifiers. However, the player has to be in the casino, then go to the room with the mirror and the bar entrance.

In addition, these controls become available in the game:

Lastly, this enables some debug info at various parts of the game.