Leisure Suit Larry Goes Looking for Love (in Several Wrong Places), aka Leisure Suit Larry 2, was lighter on the raunchy content than its predecessor. Larry's sprite in this one didn't seem to fit very well with the generally cartoonish flavor of the character. 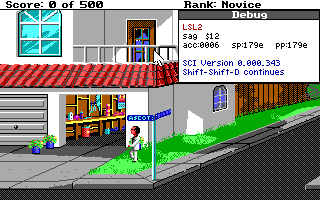 As with any other early SCI game, hold down both Shift keys and press the - key on the numpad at any point during the game. To exit this mode, press Shift and D.

At any point during the game, open up the text prompt and enter praise lord and go to a different room. v1.002.000 added another method by allowing the player to enter 555-0724 at the phone book screen.

Yet another way to activate it is to simply change global variable 100 to 1, which also enables the level select and bypasses the copy protection. The following actions can be entered.

The player could also type in SHOW GRID to show a grid over the walkable areas. However, that has been removed from the game and trying to use it crashes the game.