Leisure Suit Larry 6: Shape Up or Slip Out!

Leisure Suit Larry 6: Shape Up or Slip Out! was the first title in the series to receive a CD-ROM version in addition to the usual floppy release. Also, function keys = bodily functions... hey that new Sound Blaster was nifty!

Al Lowe published the original Game Design Document which describes some cut content (like a relatively gross character) to which remainders can still be found in the game's resources. 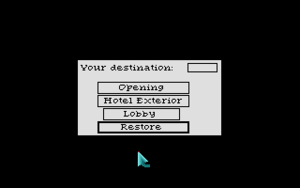 A debug mode is intact, but only in the VGA version. Extract 911.scr, 911.tex, and 911.hep out of the game, then put them in the same directory as the game's executable. Upon starting the game, the player will be greeted with a prompt asking them which level they want to go. They can also go to a couple of other locations with a click of a mouse button.

The following controls will be available:

One of the debug dialogs.

While the above debug mode is not available in the SVGA (CD) version, there are several debugging cheats hidden in the game which can be used to quickly receive items or start events. They can be triggered by clicking a specific object 4 times with the Hand action, popping up a dialog titled "Carlos, are you cheating again?" with a random Carlos joke and a message. The following objects can be used:

Dialog in the SVGA version.

The LarryMessager class responsible for displaying game text can show an error window if it is made to print a message that does not exist. The only place this can be triggered in the final game is by using the Talk action on Burgundy's guitar stand while she is performing.

Quite a few belong to easter eggs which require special numbers to be dialed. Due to how these are calculated, they can be triggered with either the original 7-digit number or the resulting 2 byte value padded with the pound (#) character. Not all original numbers are currently known, and some don't exist or create different replies in the low or high resolution version of the game.

The Ego normalize method in script 090 has a soft rant when parameter validation failed:

These views contain unfinished UI graphics meant for the high-resolution version of the game. They are found in the low resolution version and can also be seen in the LSL6 hi-res demo (which is simply a slide-show of prerelease screenshots and not even an SCI game).

There are sketched out pictures of cut areas in the hotel. They are mentioned in detail in the game design document: