This page details one or more prototype versions of Tom & Jerry: The Movie (Sega Master System).

The game is simply Tom & Jerry, which makes more sense considering the game has nothing to do with the movie adaption. The stars flicker constantly, the text colors change, and Tom and Jerry blink occasionally. After pressing Start, they glare menacingly towards each other. 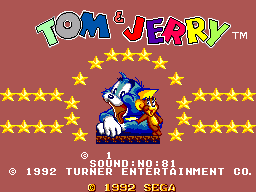 The cheat screen found in the final has been implemented, and can be activated in the same way - press Down, Down + Right, Right, 1, Down, Down + Left, Left, 2 on Controller 2.

Some minor changes to the level names were made before the game was released.

The final version adds Enjyoh (Shoji Yoshihara) to the first Special Thanks To screen.

Present at 0x0C5F0. It seems to be unused in this build, and is completely absent from the final.