Despite its name, Tom and Jerry: The Movie has nothing to do with the actual film (which is a good thing). 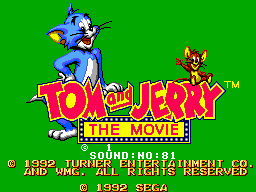 At the title screen, press Down, Down+Right, Right, 1, Down, Down+Left, Left, 2 on controller 2 (it might take a few tries; the diagonals need to be pressed very precisely). A level select and sound test will appear below the title, use the D-Pad on controller 2 to toggle and switch between them. Additionally, the following commands will be enabled on controller 2:

A unused text graphic can be found in the game, hidden by the background color. It is located at 025E00 in the ROM, which spells out as Arisusofuto, which translates as Alicesoft.