In Putt-Putt & Pep's Balloon-o-Rama, Pep accidentally lets go of the balloons he and Putt-Putt were holding, and they have to get them back by... popping them in the style of Breakout?

It's actually not that bad... for the first 30 or so levels. Much like Backyard Baseball, it suffers from Humongous Arcade Syndrome – it's way too long and too repetitive. It's not the worst case, but it's pretty hard to say that anyone who played this game made it through all one hundred twenty levels.

As with just about every Humongous game ever, this game features subtitles that can only be activated either through ScummVM or by adding

What's that, you say, this game already had a level editor? Yes, but it's a kid-friendly editor and is rather limiting. There is a much more feature-packed level editor buried in the code. It can be accessed by two methods: typing "room 5" in ScummVM's debugger, or adding

to hegames.ini and pressing E at any point during gameplay. 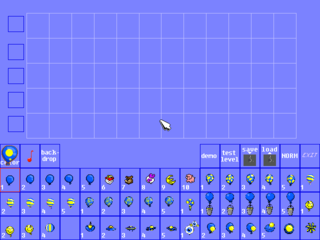 The editor is extremely simple to use once you know everything. Click on any of the balloons below to select them, and use the left click to place them on the grid. Right click on them to remove them. There is a limit to how many balloons you can have, but it is way higher than how many you can have in the kid level editor. The balloon on the left controls the colors: left click to change the primary color, and right click to change its secondary color (the secondary color is the one used for things like paint buckets and balloons within balloons).

The musical note toggles the background music on or off in the editor. It does not change the music though.

back-drop changes the background of the level and its music.

demo seems to only ever take you to the game's official first level, and resets it after you beat it.

test level allows you to play the level you just made. You get ten lives while testing.

save and load were likely used in the development process to save and load any levels the developers made. Clicking either one prompts the message "File for SAVING/LOADING: [blank]", and saves or loads (respectively) the level.

The tiles on the left side of the screen are for bonus spaceships and Percival the pig (the one who drops bowling balls on you). You may only have one bonus ship per level, but you can have all the Percivals you want if that's what you desire.

With most items that would be illogical to place on the regenerating layer, the in-house level editor prevents you from doing so, such as with pinwheels, paint buckets, and bumpers. However, it is possible to place alien spaceships from the bonus levels on the regenerating layer, even though none of the bonus levels across the entire game use them. They do not have any proper animation; instead they simply pop up with a regular solid colored balloon inflating behind them before disappearing. They do function as intended, though.

Three special names exist in this game to function as "level select" codes. FROGBOY and TOADGIRL allow the player to not only pick between every level, but also net every powerup and grant invincibility – if Pep hits the ground, he just bounces back up. Additionally, entering HUMO alone will only grant a level select with no cheats, but it can be followed with a combination of any of these letters:

For example, if you type the name as "HUMOSG", you will have the cape and the helmet.