This page details one or more prototype versions of Putt-Putt Saves the Zoo.

As with most Humongous games, a demo version of Putt-Putt Saves the Zoo was created and widely disseminated by inclusion on various game CDs, and even on their website. This release shows off the Jungle Land swamp and ends after rescuing Kenya the lion cub. It contains several prototype assets that were removed from the final.

This page only covers material unique to the demo; anything that survived to the final, such as the demo-specific dialogue, is covered in the main article.

Even though this area is only shown briefly during the intro and can't normally be played, many of its resources are present. Forcing a warp into room 2 (room 2 in ScummVM's debugger) makes it possible to interact with the area, although most things don't work correctly.

A marked-up frame from Putt-Putt's left-facing idle animation. Since Putt-Putt always faces right in this room, this never appears.

An unfinished version of one of Putt-Putt's animations is present alongside the final version. Some details were added to the raft, while Putt-Putt's interior was recolored and his lineart slightly touched up.

An unfinished version of Zanzibar's talking animation. There is a slight error in the data where one frame is lower than the rest. Zanzibar doesn't appear in the demo. 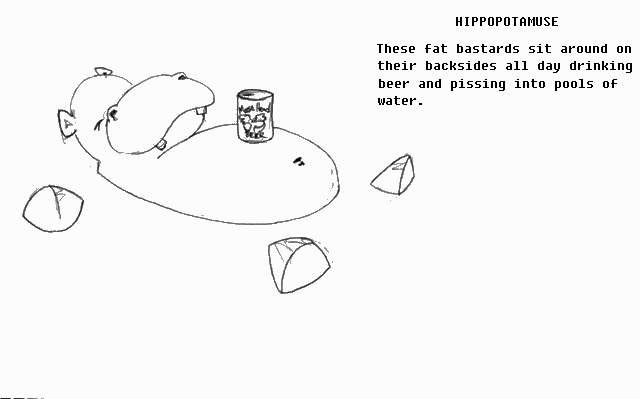 A little-known fact about hippopotamuses. Note the "Moose Head Beer", which continues a running theme in this game's hidden content.

A draft of the joke-telling toucans. They seem to have been planned to function quite differently, with one on the bottom of the screen making one on the top laugh so that it drops a feather. The last frame remains in the final version.

Another "fakey". This one doesn't look like anything from the final.

Several assets used when talking to Kenya from the top of the waterfall are duplicated in this room, along with some unused graphics.

Oddly, the background image for this room is a slightly altered version of the real background for this scene. The only difference is that the duplicate version shows slightly more of the area due to the dashboard placeholder being a simple bar at the bottom of the screen instead of an exact fit to the real thing.

Uncolored animation for talking to Kenya from the top of the waterfall. 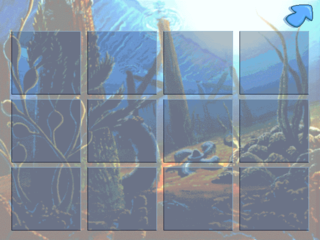 It's impossible to save or load in the demo, so this screen isn't used. That's just as well, because it's actually a leftover from Freddi Fish and the Case of the Missing Kelp Seeds and doesn't fit this game at all.

This error can be seen by using ScummVM's debugger to warp to rooms that normally shouldn't show up. The only rooms that can give this error are rooms 10 and room 1, although it's rare.