Putt-Putt & Pep's Dog on a Stick

Putt-Putt & Pep's Dog on a Stick is totally-not-Q*bert for kids. Pep gets a bunch of junk from the local "Dump Recycle", as the game calls it, and turns it into a pogo stick. Now he has to bounce across castles and gas stations, dodging life-threatening hugging bears, jetpack pigs, and possessed killer beach balls, all because … look, just roll with it, okay?

This game may rival Putt-Putt Saves the Zoo with the sheer amount of strange unused content it has, especially in relation to the other Junior Arcades.

As with just about all Humongous games, the subtitles for this game are inaccessible unless the line TextOn=1 is added to hegames.ini.

This game has a slew of debug console output. It's most easily viewed by running the game in ScummVM and setting the debug level to 0 or higher. 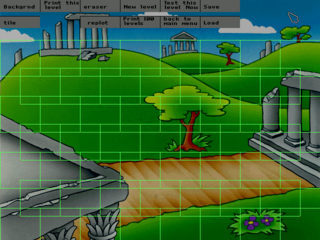 Just like in Balloon-O-Rama, a level editor meant for developer use, much more powerful than the regular one, is present but disabled. It can be accessed by adding _TeamMatt=1 to the configuration file, which will replace the regular editor with the full one and allow it to be accessed during gameplay by pressing the E key. 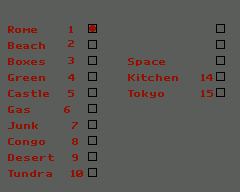 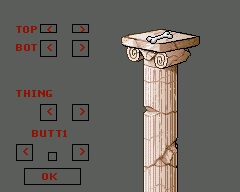 A brief rundown of the features:

Two of the level themes selectable from the developer level editor aren't finished or used.

The "Space" theme is mostly a copy of the Rome theme, but the pillars are purple and have a shimmering effect. Most likely these were placeholders for other graphics that never got finished. 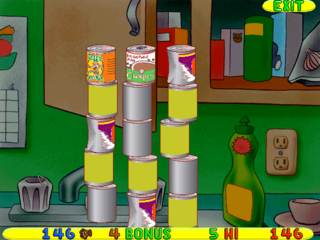 The "Kitchen" theme seems mostly complete graphically save for some blank food cans, but has no music.

This game has some downright bizarre unused enemies, some of which seem to be leftovers from early development stages.

A set of joke credits meant as a placeholder is buried alongside the regular ones. These provide a few details on a very early development stage of the game where it was named "Pogodog", as it makes a brief mention of the spiked balls and several other sprites from Putt-Putt & Fatty Bear's Activity Pack. All the graphics and most of the code for displaying them is present, but the logic for initiating them seems to have been removed and the palette was changed without updating the graphics to compensate.

Luckily, most of the missing material can be recovered or recreated. This xdelta patch restores these credits more or less as they were meant to appear. After applying the patch, beat the game (or access room 4 by any other means) to view them. Once "The End" has displayed for a few seconds, the game will exit.

The scene appears to be a swipe from the devteam at Rhett Mathis, a Humongous designer/programmer/composer who led a separate team that developed several other Junior Arcade games. Apparently there was some rivalry between the two divisions.

Metadata from the graphics files sheds some light on the identities of the photographed individuals:

The leftmost photo is named "mathead2", so it's probably of game designer Matt Mahon.

The center photo, "tomhead", is of lead artist Tom Verre.

The right photo is "dolohead", after programmer and level designer Dolores Carney.

Any savegame named CHEATER can access all the levels at the start of the game without having to unlock them.