Putt-Putt Goes to the Moon

Putt-Putt Goes to the Moon (after a bizarre accident involving his dog named Pep, a butterfly, and apparently rocket-grade fireworks) ... but he comes back, complete with the requisite "new friend" who is immediately reduced to occasional cameo appearances. At least he got it better off than Fatty Bear.

A generic placeholder for the save/load screen when no preview image is available for a room.

The tracks and their names are from the 3DO version, but equivalent data for these exists in all releases.

This track exists only in the DOS version (which doesn't use external sound files, so there's no associated filename).

These tracks are only in the Game Boy version ... okay, maybe not.

These lines for the newscaster on the radio aren't used for obvious reasons. Probably the first of the series' many developer in-jokes, which would come to full fruition in the sequel.

Almost all SCUMM-based Humongous games contain debug console output for various game bits and bobs (starting and stopping music, values of important variables, etc.). These aren't normally displayed; the simplest way to view them is to run the game in ScummVM and set its debug level to 0 or higher. 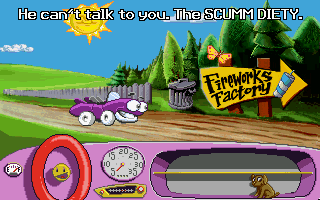 The invalid conversation handler from Putt-Putt Joins the Parade carried over to this game. The easiest way to trigger it is by forcing script 11 to run in ScummVM's debugger.