The SNES Burn-In Test Cart is one of around four discovered cartridges once used by Nintendo World Class Service to test and diagnose problems with the SNES and controllers including the Super Scope and Mouse (the SNES Test Program being another). used in conjunction with Super Nintendo Counter Tester.

This test cart is also well-known for containing an official 16-bit rendition of the Zelda II title theme.

Two unused songs can be found within the Super Scope Test bank.

What appears to be an early version of "Mole Patrol" from Super Scope 6.

Present in the Controller/Mouse Test bank.

Present in the Controller Test/Mouse bank.

A sample of someone saying "sumimasen ne" ("I'm sorry") is present in the Super Scope Test bank. Purpose unknown. 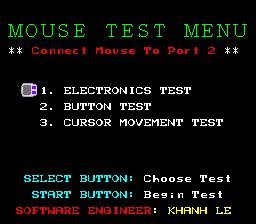 Holding L + R on Controller 1 on the Mouse Test menu will bring up "KHANH LE", the name of the programmer.