Serious Sam 4 is a first-person shooter that follows the glorious FPS tradition of blowing monsters up and taking too much time to release the fourth main game in the series.

Folders for a deer and an eagle containing their models exist in the game files, but they are untextured and not used in the game. They have animations for idling, movement, and death. A deer doe appears in the teaser trailer. 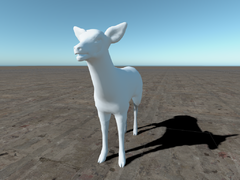 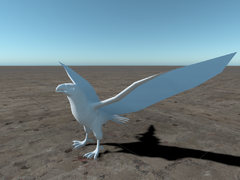 First seen in the May 20th gameplay reveal in 2020, the cut Octanian Grenadier remains intact in the game files. However, it's missing headshot gib effects and has glitchy melee behavior featuring the infamous turbo drifting bug. It has 30 health just like the Octanian Gamma Trooper and it throws stick grenades that deal 10 direct damage and 30 splash damage for a total of 40 damage. The stick grenades bear the label 'FRAG MX-230-FG69420' and are one of the few enemy projectiles in the series that doesn't explode on contact with the ground, only detonating after 3 seconds or if the player touches it. It's also the first enemy projectile in the series to have a HUD indicator pointing to its general direction. Like the other Octanians, it has a separate set of broken animations depicting it holding some kind of grenade launcher that no longer exists in the game files. 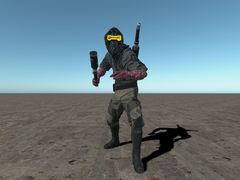 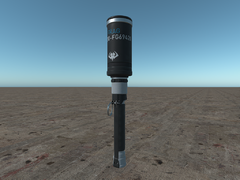 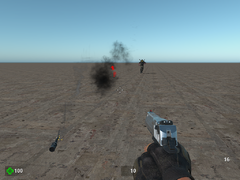 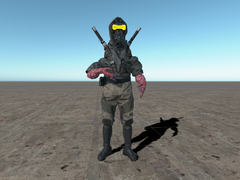 Although they appear in-game in the form of scripted sequence models, in-game files and an unused Netricsa entry implies that it was planned to be a fightable enemy at some point. It uses the vehicle entity without any working AI with player riding disabled. It has 349 health and uses the Bomb Bay vehicle part that lets it drop 10 bombs in quick succession, each dealing 50 direct damage and 25 splash damage with a blast radius of 10 meters. Its model also holds the laser fire sound from The Second Encounter and a shooting animation that plays the sound, which is not used in the game. The existence of the Laser_Projectile_Raider-old-v2.mdl used by the DummyFoe implies that an older iteration of the Octanian Raider shot lasers as its method of attack. 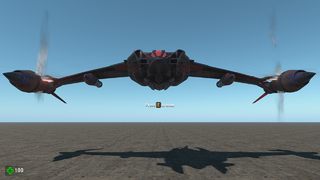 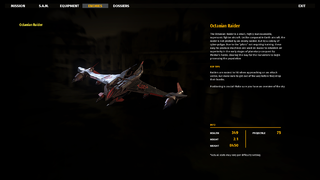 The following unused weapons are described in SchemeGen_Test.lua, an example script to generate animation schemes for player models.

One of the weapons mentioned in the SchemeGen file. It appears to be the original melee weapon for the game, as the Combat Knife's properties are labelled as CMacheteWeaponParams in the editor and the fact that the Knife wasn't referenced in the aforementioned script file. Its model and projectile parameter files still resides in the game's files and can be restored to function again to some extent. The projectile that can be thrown via secondary fire, dealing 130 damage (same as the Knife primary fire) and has a launch velocity of 30. It uses the cannonball ammo icon as placeholder and its HUD icon is half the size of the other weapons, implying it was cut before the other weapons received bigger HUD icons. The player model does not play an animation when throwing the machete in third-person mode. Only a maximum of 5 ammo can be held, with the weapon being unthrowable when the player only has one ammo left. 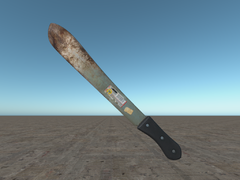 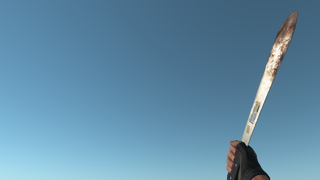 One of the weapons mentioned in the SchemeGen file. Nothing else remains of it in the game's files. Appears to be named after the Molotov Cocktail, an improvised fire bomb.

One of the weapons mentioned in the SchemeGen file. Nothing else remains of it in the game's files. The Flamer is the internal name for the Flamethrower in all Serious Sam games.

One of the weapons mentioned in the SchemeGen file. Nothing else remains of it in the game's files. A similar weapon named the Freeze Gun was also referenced in Serious Sam 3: BFE, though any relation between these two weapons is unknown.

A low-poly and low-res crossbow in the Weapons folder. It is unknown if it was to be an actual, usable weapon as there's no first-person model for it. First seen on Croteam's Twitter in 2018 as a real-life object. 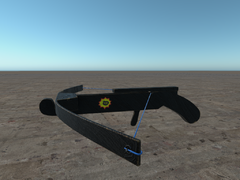 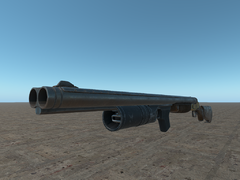 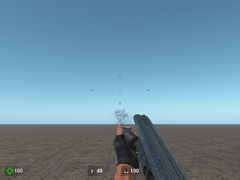 References to cut levels exist in the game files.

The scrapped side level for 04_Colosseum (The Die Is Cast). While most references to it has been scrubbed from the game files, an unused detector volume named Trigger_HospitalSideMissionVoiceOvers can be found tucked away inside a low-poly background building. Based on its placements, it appears that it would have been accessed through the end of the final city street before heading down into the ruins area by turning right to a now-locked gate. Unused Octanian Snipers on rooftops with the name Trooper_Sniper_SniperStreet suggest that the city streets leading to the Hospital would've been lined with Octanian Snipers on the rooftops.

Content\SeriousSam4\Levels\01_PB\Objectives\ contains a folder for a side level named 05a_Zoo with the objective resource file MainComputer.rsc which is unused in the game. The chapter control script for When In Rome (05_Vatican) reveals that it would've been somewhere between the park with Werebulls and the first bridge with the Zealots.

Content\SeriousSam4\Locales\enu\Sounds\Voiceovers\ contains a folder for a main level named 11_The_Refinery. Based on its numbering, it was set between The Package (10_Oilrig) and From Earth With Love (12_Tunguska). The prefix label L11O02S02 used for some of Future Sam's lines indicates that Future Sam would've appeared in the second side quest for the second main objective in the level.

There is a slew of dialogue belonging to a variety of soldiers which do not play. While the retail localization file does not have subtitles for these lines, the Journalist Build does. For convenience, those subtitles will be provided here.

01_Forum (Death from Above)

These lines suggest that you were originally able to tear out a Gnaar's eye when using a melee finisher on them, much like Serious Sam 3: BFE. In retail, Sam uses a knife and stabs the Gnaar.

02_Pompeii (Four Horsemen of the Apocalypse)

There is dialogue for Fabio as part of the Key to Success sidequest. Despite Fabio not having any used dialogue, he is listed in the credits.

Invisible Gnaars do not appear in the campaign.

There is dialogue for a cut sidequest. The entirety of this conversation plays in the journalist build.

After beating the sidequest:

There are three sets of unused side quest dialogue for The Package, two of which pertain to side quests that no longer exist in the game.

The computer terminal side quest had Sam talking at the start and end of it, but they're not used.

There would've been a second side quest that featured a not-very-frozen Khnum. An audio log file from Dmitry for this side quest exists in the game files but goes unused.

There would've been a third side quest that featured supplies and aliens trapped in a room. An audio log file from Dmitry for this side quest exists in the game files but goes unused.

Dmitry has some unused dialogue pertaining to the cut Refinery level.

Bill Corwin has a line that was intended to play in When in Rome (05_Vatican). It is related to the cut Zoo side level.

Corwin also has a line that was intended to play in the cut Refinery level.

Content/SeriousSam4/Models/Prototype/ScaleReference.mdl is a model of five low-res humans. They are, from left to right; Ante Vrdelja from Croteam, a character named Resistance Soldier Maja, Kenny, Jones, and Carter. 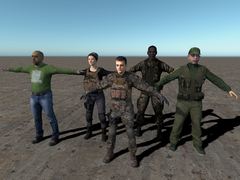 An unused drop pod that's used as a method to spawn enemies. Any puppet within 15 meters of its landing position will be dealt 15000 damage when it lands. Its function is referenced in the script handling the Scrapjack's introduction cutscene in Death From Above where it's using a different deploy animation where one of its "wings" are propped up. There is also an unused fiery shell attachment model that's meant to appear while it's falling and disappear when it lands, but it doesn't appear due to attachment animation events not working for some reason. 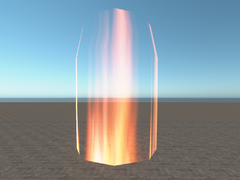 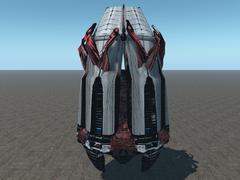 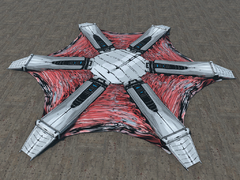 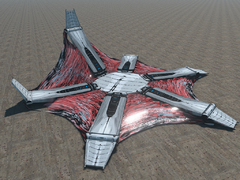 Typing prj_strCustomOccasion="E3Demo2018" in Breakfast in France (06_Countryside) will turn on the pre-alpha text in the HUD. 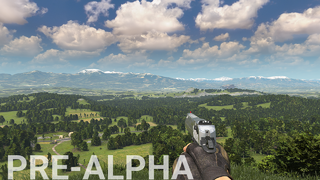 The inside of General Brand's shorts cannot be seen in-game through regular methods. Removing the polygons for his shorts using the Serious Editor reveals a big surprise. 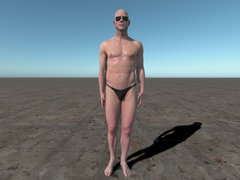