The dancing genie and her various friends and foes escape the world of pixels and enters a brave new world of HD graphics and DLC expansions!

An "Ultimate Edition" was released in 2018, compiling together all the DLC with a bonus costume.

On the Kickstarter page for Shantae, one of the stretch goals was making Bolo, Risky Boots, Rottytops and Sky all playable characters on a different mode. On the Main Menu, it's possible to see the silhouette for Risky's Boots Hero Mode, but not the rest of the characters. It's unknown which ones are going to be available or when it's going to be released. However, the Hero Modes with Bolo, Rotty and Sky were all merged into Friends to the End, featuring the Nega-Shantae, likely to make up for her not appearing in a proposed "A Dish Served Cold!" chapter.

In the game's files, portraits for a Bolo Mode, along with a complete "Idle" animation holding his ball and chain weapon can be found, although the weapon is currently just a sketch.

Bolo holding his weapon, probably meant for his own playable mode, even though it was likely meant to be reused for Friends to the End. Animation speed is a guess here. 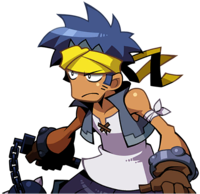 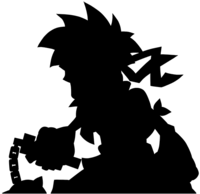 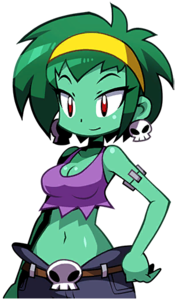 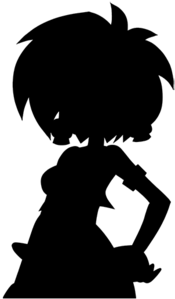 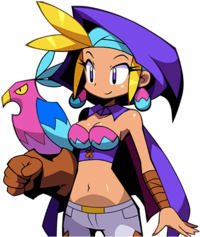 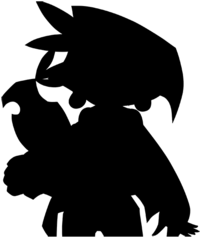 The two portraits for each hero, meant for the Main Menu. The first ones are duplicated from their conversation portraits, although they're mirrored if all are compared from the game's files. 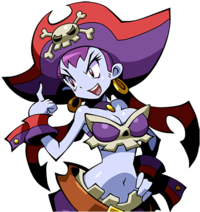 Currently, Risky Boots is unavailable to play as, although her silhouette is visible in-game, not to mention she is playable in Pirate Queen's Quest. A duplicate from her conversation portrait (which is also seen as a spirit in Super Smash Bros. Ultimate, albeit unedited), although it's mirrored if both are compared from the game's files. 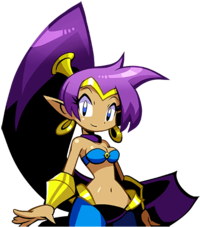 Awarded to backers who paid above $12 can activate a code to use a Blue Shantae color scheme, although, it seems that it's not yet in the game's files other than this portrait (the folder with all Shantae portraits doesn't have any either with this custom color, despite there being pictures of portraits of Shantae in her blue outfit being shown in the game as seen on the Shantae Wiki, like the one above, for example, and a shocked blue Shantae is also on the wiki, which could mean that blue Shantae is available in the Ultimate Edition of Half-Genie Hero). 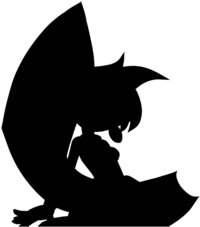 A silhouette image for the Main Mode. Because the normal mode is always available, this is never used. A duplicate of this file exists for the Blue Shantae color scheme as well.

In this scene, several new "enemies" appear on the race. Among the new ones, two "enemies", which appeared as allies before, were cut:

Although this sprite is used in-game, there's a duplicate with just 5 frames on the "racers" folder, which implies that they would be used on the race mini-game. Only the blonde girl is in here, the other two mermaid girls aren't available in this folder.

A rather interesting image that shows a "sketch" of one of the girls, found in the same folder as the racers.

And, the Mayor apparently was going to race as well. Similar to above, this one is also a sketch, but it's located only in npc_racer.pak, a folder which only includes this sprite and nothing more.

A very crudely drawn missile, probably meant for the boss battle with Twitch and Vinegar. 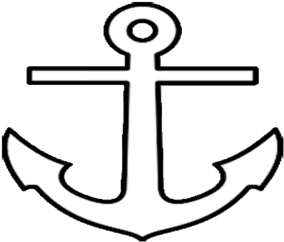 A placeholder image for her bullets or bombs. The image in question is actually a Stickybomb from Team Fortress 2.

An unused sketch of this enemy climbing a rope.

At first glance, this looks used in the game, but it actually uses a different shading on the pants, and the image isn't properly anti-aliased either. 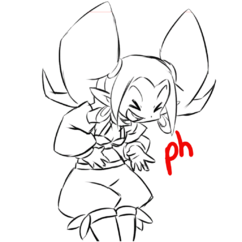 A sketch for the Rival Genie (Holly Lingerbean) is located on the folder, the "actual" image (fully colored) with this pose does not exist, as Holly only has one portrait.

An animation with "Let's Rock" written on it can be found in Squid Baron's files.

The same animation as above, but with an orange color.

A logo for "fmod" that does not show up on the Credits.

Several enemies with "flame" abilities has this temporary animation in their folders. This is Dhalsim's Yoga Fire animation from Marvel Super Heroes vs. Street Fighter, with "Temp" written on top. 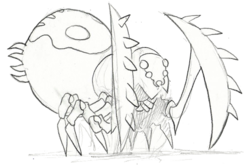 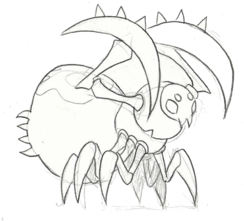 Two sketches from an unknown Enemy or Boss found in the same folder as the Scorpgal enemy. The first one appears to be an early concept for the Bonelegs enemy.

Half-Genie Hero contains a lot of leftovers from the previous Shantae games. These were probably used as a base to make the art style for this game. These sprites are separated from each other in the game's folder, but it was merged into an animation to save space.

A pixelated version of his coat.

Two pixelated sprites of him.

Each of those sprites have their own duplicates, named as "ammo_baron" and "soldiers". They're both the same. The only two actual Ammo Baron sprites are above.

A pixelated version of his soldiers with a "Stand" pose animation.

A pixelated version of his soldier with a "Crouch" animation.

A pixelated version of his soldier with a "Throwing" animation.

A grenade throw animation, probably to use together with the animation above. There are some weird artifacts on the middle of the sprites as well.

Various frames for an animation for going backwards and forwards.

Various sprites for a jumping sequence for his soldiers.

A pixelated version of Hypno Baron with his "Laugh" animation.

A pixelated version of Hypno Baron with his "Melt" animation.

A pixelated version of Squid Baron with his "Idle" animation.

A pixelated version of Risky Boots with her "Stand" animation.

A pixelated version of Risky Boots with her "Walk" animation.

The 8th and 20th frames are strangely uncropped or rotated differently.

A pixelated version of her spike ball. The second image is not found anywhere else, and it's called "anchor_2", probably related to the first one. 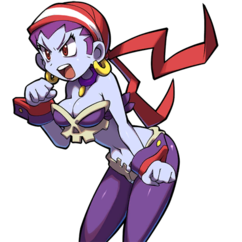 Located at Shantae's portraits (portrait_shantae.pak), the older design for Risky Boots' portrait that was used in The Pirate's Curse.

A pixelated version of the arrows used by the Archers in this game.

Located at a rather strange .pak, a pixelated version of the crab enemy.

A different color for the Slime Girl enemy is in the folders but is unused. It only has one sprite, which is a lazy image edit of the normal stance pose of the used pink sprite.

The Scorpgal from Shantae and Shantae and the Pirate's Curse is actually here, completely redrawn to use in the game, but she was scrapped in favor of using the new Bonelegs enemy found only in this game (specifically in the story and costume modes, as well as in Friends to the End). The general quality isn't the best, so it's likely she was dropped early in development. Despite this, the Scorpgal does return in the Pirate Queen's Quest DLC, and would return again in Shantae and the Seven Sirens.

A block animation. The actual used Spider in this game also has a block mechanic, so, kinda neat.

Some sort of attack.

A magical attack with a weird effect going on.

For the separate Scorpgal sprites, check out this horizontal sprite sheet. 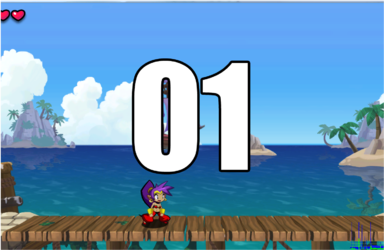 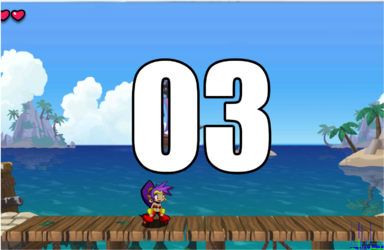 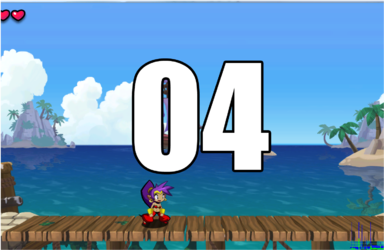 Found at backer_art_0.pak, several placeholder artworks meant for the first page in the Art Gallery found in the game. The first one has also a duplicate called "backer_art_0_1_1". The first page of the gallery has fewer images than the rest, so it's possible that more artworks was considered.

The "GemJug Jar" transformation uses the same jar sprites that are breakable in-game, although, in the folder shantae_gemjug.pak, there are sprites for the transformation, but they're all copy and pastes from the Harvest transformation.