Shrek SuperSlam would just be another forgotten licensed game, but its surprisingly decent Power Stone-style gameplay and the internet's weird Shrek culture have given it a decent presence in competitive gaming.

Various level renders used on the stage selection screen exist for the unfinished levels, though they are simply the level name in a monospace font.

Unused textures show the level icon and stage select banner for a level based on Shrek's swamp from the films.

These are four music tracks that are never heard in the game and is it unknown where these would have fit.

This track is an early version of the Beanstalk stage.

This track has no name.

This track has no name. It has a silly horror vibe to it.

This track has no name. Like the previous track, it has a silly horror vibe to it but also has a 80s rock vibe too.

A mode exists that replaces the usual pause menu with an AI debug menu. This allows the developers to change AI properties and behaviors on the fly. 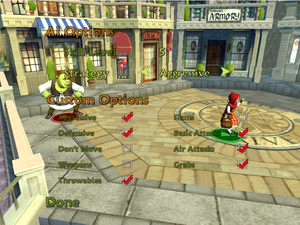 A debug level featuring a curved surface, many items and moving platforms. The last is strange, since moving platforms do not appear in any of the regular levels. The top platform spawns many items on a fast loop, including all three potion types. When asked about it on the ShrekBoards Discord, one of the game's developers said:

Funny. Another thing that you think is lost to time. We called it the danger room because of x-men of course. 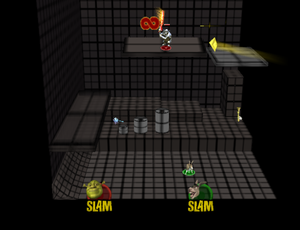 Appears to exist just to test various effects in the game, which appear in the middle of an otherwise small stage. The lighting on the character models also appears darker. 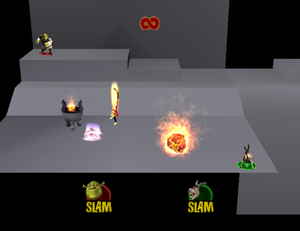 A large level likely made to test the Havok physics engine, which is used by the game. Seems to contain a copy of Danger Room, as well as a large additional area with various slopes and invisible areas that launch the player. 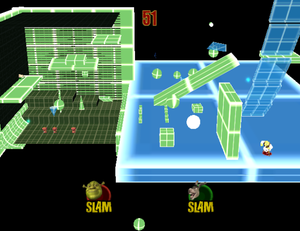 This is a flat level containing a transparent cone in the middle. Items spawn on a fast loop in front of the cone. A model of the number 1 can be seen on the far right repeating a falling animation. Invisible walls guard the level, except for the left side, which players can walk off. 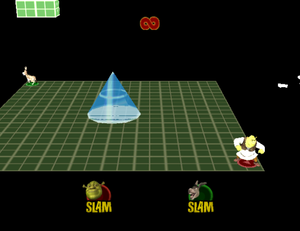 This level appears to be the same as Danger Room, except with different colours. Only a single item spawns on a slower loop on the floor of the level. 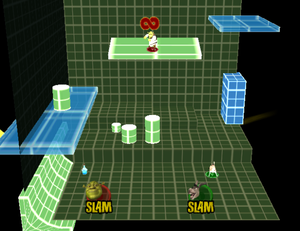 What appears to be the remnants of an unfinished pinball mode. This level has spherical objects the player can pick up for the balls, as well as flippers that activate periodically. Digging through the game's files reveals a file for a pinball mode, but loading it in conjunction with this level does nothing different. 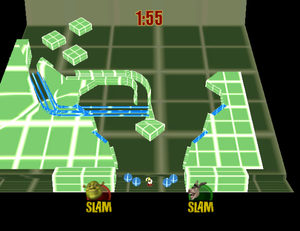 An unfinished pirate-themed level. There is a castle with cannons that shoot the player into the ocean when touched, and an invisible platform in the sky that players spawn on. A model of a pirate ship loops an animation in the background. 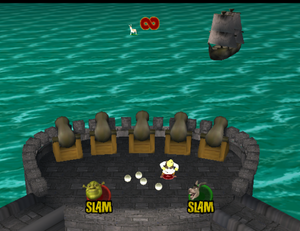 Present only in the root directory of the PlayStation 2 version is a dummy file named STRIDENT.BIN. It is actually the first 885MB of a disc image for the PSP port of Tony Hawk's Underground 2, another game from the same developer.