Star Trek: 25th Anniversary is, as you may have guessed, a game to celebrate the franchise's silver anniversary. Set during the original five-year mission, the game contains references to various episodes, some spot-on writing, and even begins very much like the show (situation occurs, opening sequence, story begins).

Graphics for two items that seem to have been cut before the final release, as no guides make any mention of them: specifically, a set of secret documents and a cloaking device, both mentioned as being involved in a trade while on Shroud. They were to be acquired by Kirk and company before leaving, with the cloaking device most likely allowing the player to skip the following battle with the Romulan ship. 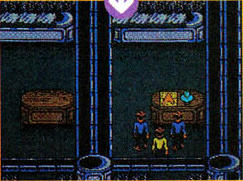 All this is evidenced by the game's coverage in Nintendo Power, which had a screenshot of these items. In the final game, they were replaced by a bundle of Dilithium left for the crew by Harry Mudd.

This spinning space station is stored along with the planets in the game's map. Since all stages take place on planets in the final version, it is unknown how this might have been used. An educated guess would be that during development, this was meant to be a trading post within the Neutral Zone, and was later replaced with the planet Shroud IV.

An unused graphics bank containing nothing but the letters "PIHL" repeated many times.

Unused animation frames for the icons of Scott and Uhura. Unlike Kirk, Sulu, and Chekov, icons are not used in dialogue for main bridge crew that can turn to face the camera (or, when Scott has the bridge during the Shroud mission, he contacts Kirk about transporting the team near the hidden cave), wherein they themselves are the ones animated. Spock's are only used when he is in an away team.

A menu icon for the tricorder, conveniently assigned to the A button instead so the menu wouldn't have to constantly be pulled for it.

The scrapped cloaking device. This likely means it was to be manually activated from the bridge menu before escaping from the Romulans.