Data: The miners are extremely vulnerable to attack.

Riker's in command of the mission!

Picard: Your move, Number One.

Will he unravel a deadly mystery?

Riker: I'm the only one who can do something about this.

Or bring doom to the Federation!

Velura: All good things, they say, must come to an end.

It's up to you! On an all-new STAAAAR Trek! Thenextgeneration.

The "short version string" in each file's vers resource is "GLG", the signature of programmer Gregory L. Guerin.

The substitute for missing text has been trimmed since its appearance in Hidden Agenda...

...but the one for missing graphics remains identical:

As before, the devil shows his face anywhere a still image is missing. This is what the game becomes after deleting every Stil resource: 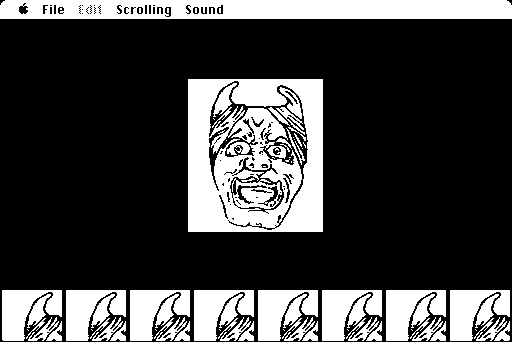 Velura's assistant Smith wants to leave his job at the mining outpost behind, but there's no way to grant him passage on the Enterprise. Data states that taking him "would be against Starfleet regulations", Worf rues that "there is nothing we can do to assist him", and Riker reflects that "he certainly can't come with us". In fact, this encounter has no branching choices at all: you can only click Acknowledge in response to Smith's complaints.

However, at one point, players were clearly meant to have the option of beaming him up. An unexplained but very common glitch turns the "Mr. Smith" topic in the observation lounge into an airing of grievances about his presence aboard ship:

Despite the above, Smith is still back at the D-39 base, and can be killed if it suffers a terrorist attack. Even then, the erroneous lines remain accessible in the lounge.