The fourth fighting game in the SNK/Capcom vs. series, and second one by SNK.

Given that win quotes are not displayed after defeating Athena or Red Arremer, and that they are not playable under normal circumstances, these two win quotes (both vs. Red Arremer) go unused. 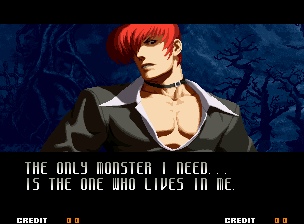 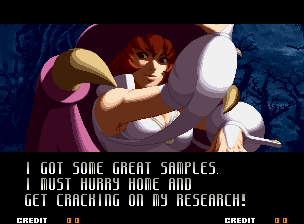 By using DIP Switches on a modified machine or using the Kawaks emulator and setting DIP switch 1-1 to on, you activate the Debug Object Viewer, wherein a sprite of Kyo will appear on-screen accompanied by a number of numbers. Most of the time, the Kyo sprite is miscolored (unless you choose Kyo himself), due to using player 1's character's current palette. Press Start twice, then hold it (make sure it's in an actual game, best done in Training Mode) and press any button. A and B will cycle through the selected characters sprites, whilst C and D change characters.

SvC Chaos contains a number of unused sprites and animations for several of the cast. For more information on the unused animations, please check out Kao Megura's FAQ of the game, specifically the Disabled Moves section: http://www.gamefaqs.com/neo/914539-svc-chaos-snk-vs-capcom/faqs/24105 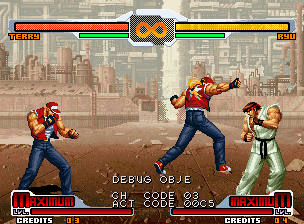 Terry's Back Knuckle (Forward+A) command move from The King of Fighters '98. 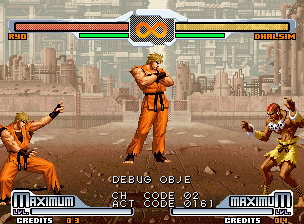 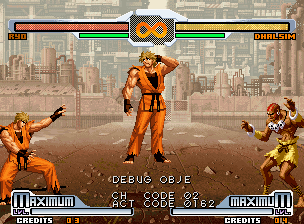 Ryo's special intro against fellow Art of Fighting character King, circa The King of Fighters 2001, wherein Ryo looks away and scratches his head, embarrassed. There is no explanation for why this would be in, outside of speculation that King was going to be included.

He also has unused animations for his SDM Ryuko Ranbu as well as a slower Ryuko Ranbu ending in a spinning Kohou, which is more difficult to accurately capture. 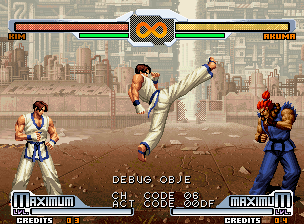 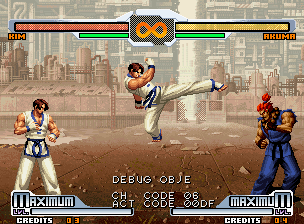 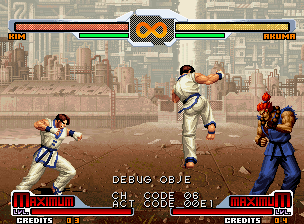 He also has two unused variants of his Neri Chagi kick command move which would change depending on if he comboed into them or not. Here they will always be the same. 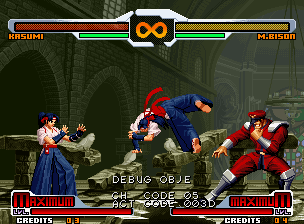 Kasumi's backward roll from her appearances in the KOF series. 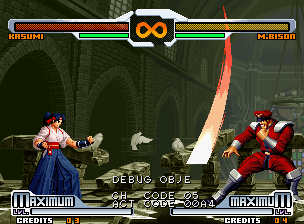 The orange-red SDM variant of Kasumi's Chou Kasane Ate. In-game, she only has the blue DM version. 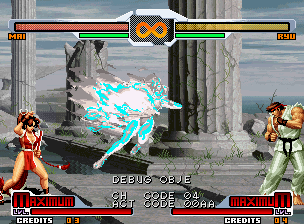 The DM version of Mai Shiranui's Chou Hisatsu Shinobi Bachi. In-game she only has the SDM version as her Exceed move. Quite why they chose to remove it like this is a mystery. The corrupted colors have no explanation yet. 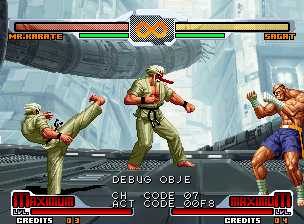 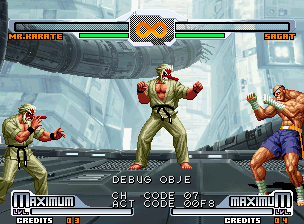 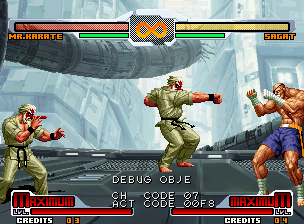 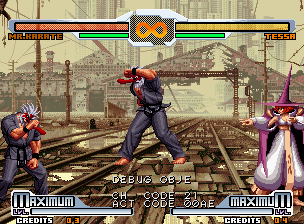 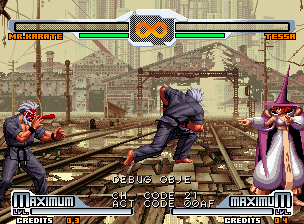 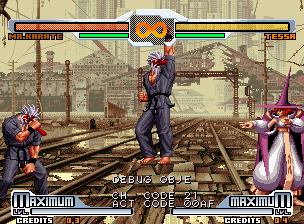 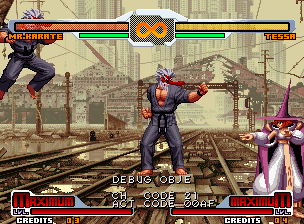 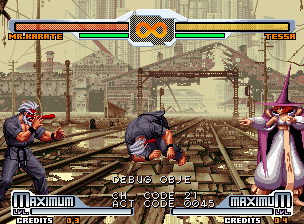 Serious Mr. Karate also has unused sprites for Takuma's backward roll from the KOF series. It is quite interesting how such sprites went unused after SNK went to the trouble of spriting in the Mr. Karate tengu mask onto Takuma's sprites for these. 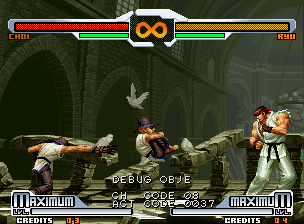 Choi's unused backwards roll from the KOF series. He also has Guard Cancel variants which are the same as this except for an added Guard Cancel spark. 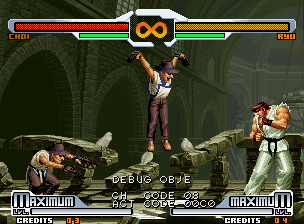 He also has the animation for his SDM Hou'ou Kyaku. He only has the DM version in-game. This unused animation was slightly more difficult to capture. 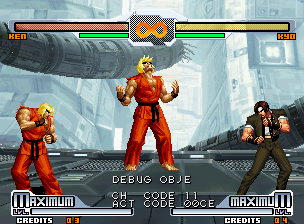 Ken has the sprites of some of Violent Ken's exclusive moves (Shinbu Messatsu and Rasetsu Kyaku) and vice versa for Violent Ken. 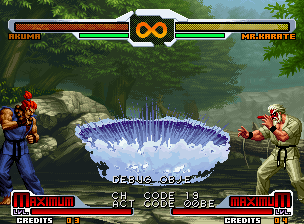 The sprites for the steam from Shin Akuma's Misogi Exceed are inside normal Akuma's sprite sets. 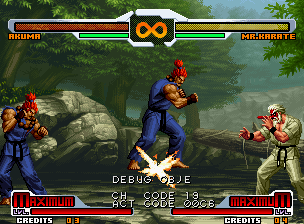 He also has a hard-to-properly-capture animation for a slow, disjointed combo that starts with a grab, a possible variant of his Shun Goku Satsu. 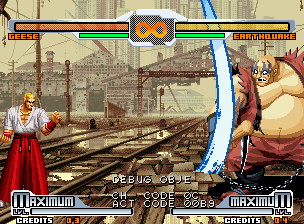 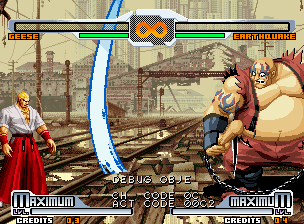 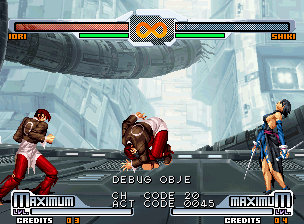 Orochi Iori's old backwards roll from The King of Fighters '97. No character can roll in this game. 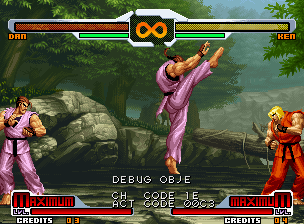 Though hard to properly screen-capture, Dan has an unused third variant of his Hisshou Buraiken DM. He usually has two depending on which kick button was pressed to initiate it. 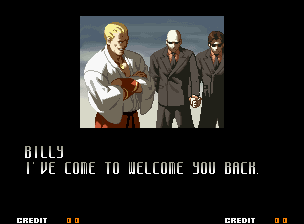 With an emulator that can remove sprite layers, it's possible to remove Billy's sprite layer from Geese's ending to reveal that the bodyguards, Ripper and Hopper, are holding hands.

The game contains a fairly large amount of leftover graphic data from The King of Fighters 2002. This includes the game's intro graphics, fight order portraits, victory portraits, some stage background sprites, ending graphics, and menu / announcer graphics, among others. You can see these images by loading any version of the game in Kawaks, pressing Ctrl+T to open the tile viewer, and navigating to address 494874.

Geese Howard's voice contains a variant of Raising Storm, and the whole voice was divided in two separate parts (presumably it was meant to be cooperated with the unused K.O.F.96-style Raising Storm mentioned above).