Team Fortress Classic is a Valve-developed mod that was originally released with a Half Life patch. Back in the day, when men were men, women were nervous, and Medics were faster than Scouts, it ruled the FPS scene with Unreal Tournament, Quake III Arena, and Counter-Strike. It's only played by a handful of people today, since most players moved on to the cartoonier Team Fortress 2. Subsequently, this game got added to TF2's storyline proper.

An unused flag model can be found in the game's files under the model name "bigrat.mdl". The actual model is from Quake Team Fortress, the first TF game ever made.

A gas mask model can be found in the game's files. It is likely that it was supposed to be used for the Rock2 map, as the Quake Team Fortress version of Rock2 uses a custom gas mask model for the item that protects you from gas when a team scores.

A HUD texture for an early Nailgun can be found. The actual model shown is the HL1 MP5 model, which can be seen in an early screenshot.

An early Flamethrower HUD image can also be found with the rest of the HUD images, and it can be seen in a pre-release screenshot as well. It seems to be an unaltered Gluon Gun.

All of the powerups from Quake can be found in the game's file, placed in the map editor and work in-game, but only the Biosuit appears in official levels.

A model for Yellow armor follows the same pattern that most of the Quake powerups do; model found in the files, can be placed in maps and works, but never used in any official map.

Note that all of these can be found in TFC.WAD and TFC2.WAD unless otherwise stated.

Buttons with Numbers on Them

The game contains both lit and unlit versions of an elevator button used in Half-Life, but with 1, 2 or 3 on them. The lit versions are colored red, instead of the orange/yellow color the source texture uses.

The CABLE set contains textures of signs leading to the flag room, and oddly, a tram. Perhaps there was going to be a level that had a tram in it at one point?

Team logos of the Green and Yellow teams can be found. However, since these teams were not used in the base game, they go unused.

A sign with "help" on it. Based on how it's located right after the command point signs and made in the same style they are, it's likely that it's connected with them.

A texture with a keycard (the type found in rock2) can be found in TFC.WAD. This was meant to be used in the level eleventh.bsp, which was cut from the game and released separately.

The OFF set of textures appear to be textures for modern office buildings.

These were meant to be used in the level signal.bsp, which was cut from the game and released separately.

The "S" signs consist of signs that were not used in the final game. The metal signs were meant for the cut map signal.bsp, while the white ones were intended for eleventh.bsp.

Located in tfc2.wad is an ad for the then-upcoming Team Fortress 2. 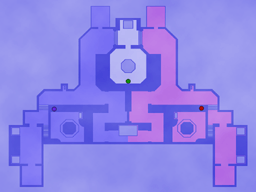 A map for a cut level can be found. It was meant to be used in the level eleventh.bsp, but after the level was cut, it went unused.

When the modern GUI for TFC was launched, the graphics used to indicate the player classes were from the old models. But, once the new models were added, the old images were replaced with images of the new models.

Like other GoldSRC games, TFC underwent a few changes between the WON and Steam versions of the game.

The Steam version updated the menu to use the style seen in Half-Life changed the background graphic to an image of the HWGuy behind a bullethole-filled background, and removed the animated logo. The console also uses the same style used by the Steam version of Half-Life.

In addition, a Teleporter was added to the Steam version of the game.

The German version was edited to remove blood particles and change the blood splatter to tamer stuff. It also made every single class use the robot model from Half-Life, making it difficult to distinguish between classes.