Top Gear is one of the many racing games to come out during the SNES's lifetime. Based on the Lotus Turbo Challenge series, Top Gear spawned numerous sequels across multiple platforms. 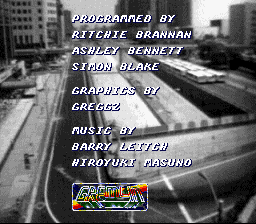 According to programmer Ritchie Brannan, the credits were in the game, but before the game released, Gremlin Graphics told the staff to remove them from the game.

To unlock Hidden credits, set the "2 PLAYERS" game mode. Enter the player's setup and input first player's name as " DISPLAY", and the second player's name as " CREDITS". Note, both names must begins with SPACE character. To input it use RIGHT ARROW.

Some of the "taunt" speech balloon graphics differ between the European and US versions of the game. Since Top Gear was made by a British developer, it's likely that the European version's graphics are the originals, which were cleaned up for the North American release. The "kiss my ass" balloon was removed entirely rather than replaced; it may or may not actually be used in the European version.

The Japanese version (Top Racer) goes even further, replacing several of the speech balloons for no apparent reason (but retains the European version's "what the hell?" balloon.)