Toy Story 2: Buzz Lightyear to the Rescue is a Super Mario 64-inspired platformer based on the movie. A fairly well-regarded one, too!

Most of the levels in the game have some disabled terrain collision areas that are placed over the LOD models and have diferent types of terrain (slippery, harmful, wet,...) and some ramps. 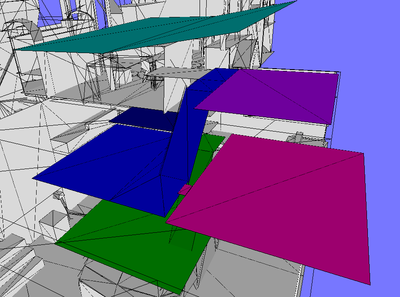 Phil Harrison, then-Executive Vice President of Sony Computer Entertainment Europe, came to visit Traveller's Tales having just revealed the PS2 in Japan by showing off a particle demo. Jon Burton (founder of Traveller's Tales) coded up the same demo on the PS1, and left it in the Toy Story 2 game by accident.

This tech demo has been in the game since the first known preview version, and can be accessed with the following GameShark code (final US version SLUS_008.93) 800D7EBC 0009 overriding the Movie Viewer menu option. You can control it with the D-Pad:

A Beaver model that would have been one of the 5 collectibles in Al's Penthouse. It is unclear if this was replaced by the final Critters in the level, or if it would have shown up alongside them and was removed.

In the original American release of the game, the gunslinger enemies that first appear in Al's Penthouse resembled a stereotypical Mexican. They were changed into blonde cowboys in the Greatest Hits re-release and the European version. The Dreamcast and Windows ports use the later design. But on the American Windows 98 PC release, the Gunslinger enemy remains.