Ultima I: The First Age of Darkness is the grandaddy of all RPGs, but even this game had an early version.

This first version of the game was released in 1981 and written in a slow Apple Basic. Gameplay mechanics were more primitive, and the game is unwinnable at the space scenes should the player use a more modern Apple II due to changes on how the replacement microprocessors handle undocumented microchip instructions. 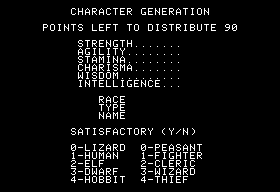 In the 1981 revision, the character creation screen gives the player has options 1-4 to select the race and type. Race 0 would be "LIZARD", Type 0 is "PEASANT", with no bonus for selecting them should they be enabled. Race and type selections are found within the file BEVERY, at offset $D3 for 10 bytes, which can be zeroed out to obtain these two picks. Both texts are Akalabeth references: Peasant would be the default name should the player never find Lord British, and Lizard refers to the self-transformation magic. The race and type selection are also exposed should the player force-load a blank character (specifically choosing two disks, putting said blank character disk in the second drive, and continuing the game), but expect the game to be unplayable for a while because the player is pseudo-randomly placed on a small island.

These text strings remain in the 1986 Apple version but aren't accessible.