It's Gradius II... is there anything else to be said?

DESTROY THEM ALL! (Warning: it's not possible.)

In Gradius II, the non-beam laser is called Ripple Laser, like in Salamander, but in Vulcan Venture, it's Pulse Laser, the name from Salamander's localization (and update) Life Force. Also, as it was with the Nemesis set of the first Gradius, the player-following orbs are called Option and Multiple, respectively.

To coincide with the name differences, these powerups also have region-differing announcer voice clips when selecting them in the powerup bar. These are for the Ripple/Pulse laser...

...and these for the Options/Multiples. 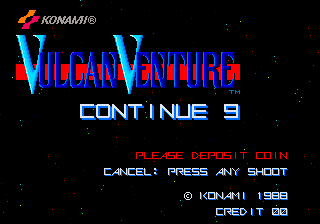 Taking another localization cue from the Nemesis version of the first game, Vulcan Venture has a Continue feature that's not present in Gradius II, this time, however, there's no continuing limit. But, since this game didn't receive the Nemesis treatment of spawning orange enemies when players die to give a chance at power-up recovery, dying at certain checkpoints still makes progression impossible and this feature sadly turns out to not be that useful nor necessary.

There are three versions of Gradius II listed on MAME: "Older", "Old", and "New". The newest set, for whatever reason, changed the "non-Only" dip switch thresholds for extra lives; previously they were the same settings as in the Gradius version of the first game, the newest set increases the values significantly.