Yet another licensed arcade beat 'em up by Konami, this time starring the world's favorite X-based superhero team.

Too many results found for hilarious X-Men Arcade quote. Please narrow your search.

There are unused intermediary digits for the Game Option menu's volume control. It also goes up to 35 instead of 30.

The North American revisions do not have an option for Loop Setting. In those versions, the game will loop endlessly as long as the player is still alive. The Loop Setting option will end the game when Magneto is defeated for the first or second time.

The default volume was also changed from 20 to 23.

In all other versions, the orbs are always consumed before energy is consumed, making Mutant Powers much safer to use. 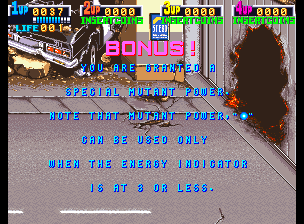 Also in the North American game, all players will receive an additional Mutant Power orb at the end of every stage. This bonus is not present in any other version.

Finally, the way Mutant Powers are displayed on the HUD was changed.

All damage values assume that only 1 person is playing. They're further modified by the number of active players. Hope you like numbers.

Stages 1, 2, 3, and 4 are shorter in all non-North American revisions of the game.

The first stage was cut in half. Originally starting in front of a destroyed building, the international versions skip ahead to the subway just after the wrecked car.

A minor change here, the first ~2 screens of Stage 3 are skipped in international versions. 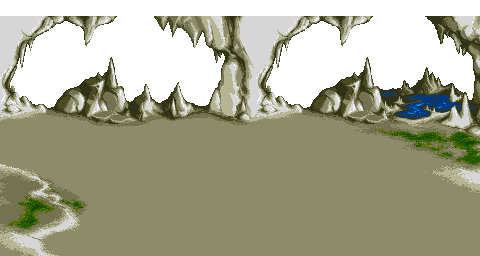 An even smaller area skipped, about one-and-a-half screens wide.

The North American game will display this text during the ending, notifying the player that they can continue playing after the credits.

This was removed from other versions when the Loop Setting option was added.

The non-North American 2-Player versions add two power-up items: An energy pill that restores all health, and a small orb that gives the player one Mutant Power. They're dropped from white-and-pink colored Sentinels, which appear in set places in every stage.