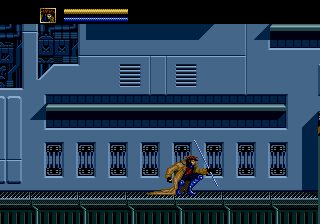 Hold Down+A+C, then power on or reset the Genesis. Keep the buttons held until the title screen appears, then press and hold Start (while keeping the other buttons held). Release all of the buttons once the difficulty select appears. Choose any difficulty and character, then when the game starts, go to the right. There will be 8 panels on the wall, hold Down and press C in front of any of them to go to the corresponding level. This feature can also be enabled by using Game Genie code RFAA-E6W8.

Note that for some odd reason, the button code won't work if there's a controller plugged into port 2.