Baldi's Basics Plus is an edutainment parody horror game for PC, Mac and Linux, with console and mobile ports planned for the future. It is an expanded version of the game Baldi's Basics Classic that adds things like new characters, randomly generated levels, field trips, and challenges. The initial launch cost is US$10, but the price will be increased as the game is developed.

All of the below objects have very little remaining about them, having just an entry in the game’s files, with no code left over for them.

The item would've probably been used for spinning around. This item could reference the Fidget Spinner in one of the death screens in Classic.

Unknown. It may have been for stunning characters.

It might've been for seeing through walls. In later versions, the code for it was removed.

Possibly meant to be thrown at characters in the Schoolhouse, or possibly meant for a scrapped football minigame that was planned for the game before being scrapped all-together.

Before V0.3, There are the Unused animations of farming/camping Baldi slapping his ruler, meaning because the speed of his animation is dependently slow on his slap rate.

It was later removed from the game's assets since it was replaced by the revamped field trips.

Before V0.3, Baldi would dab in the ending of the game and will quit into the Title Screen. This was removed because it was currently a placeholder for the actual ending mystman12 was still producing.

Screenshot shows the reference to a gorilla in the script of Baldi's Basics Plus V0.3.2. This cut character was never got implemented, while the other animals are kept and implemented in the final. 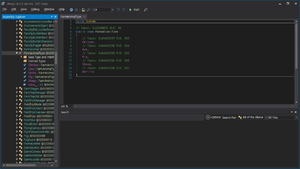 TimTom is a character that first appeared in Baldimore comic series where he throws the ball to Baldi from the other window. The comic titled Ice Block, which mystman12 said it was created around 2011, but it's around 2009 before Baldi's Basics was developed in 2018.

He's planned to appear in Baldi's Basics Plus, but cancelled this idea due to an unknown reason.

The farm field trip appears completely different prior to V0.3. There was a checkered flag for the goal beyond this point instead of a barn. The player had to navigate the maze and reach the flag to complete the field trip. After completing, there were stars for the grade and the player would receive some items to use in the Super Schoolhouse. If the timer reached a random time between 150 and 350, a giant Gotta Sweep would appear and reap all the corn, getting rid of the entire maze. After Gotta Sweep completely passed through the player, Baldi would spawn and chase them down. After reaching the flag, a message that appeared in the chalkboard said: "You made it through! You win the knowledge of how good corn is, and these items!".

The old description was "Find your way out of the corn maze as quickly as possible!".

The corn texture then got reused in the new version of the minigame, but it has been resized to be a more smaller sprite.

The camping field trip appears completely different prior to V0.3. The center of this area consisted of a campfire. The player had to search for logs in order to keep the campfire going. Baldi would start to chase the player if the fire goes out. When the player put more logs into the campfire, they would earn additional points or "extra score" in-game. Other characters also appeared: Arts and Crafters would charge at the player if they go behind the "NO" signs for more than 10 seconds, and after a few seconds, he would teleport the player near the campfire along with Baldi himself next to the campfire if the fire is already out, so Baldi would still have a chance to end the player's field trip as well. Cloudy Copter was floating in mid-air at the beginning, but after 30 or more seconds later, he would descend into the ground and start blowing wind on the campfire, making it shrink two times faster than normal, but will vanish when the player comes near him. It's a Bully, hiding behind a tree, would sneak at the player and steal all of their logs upon contact, although he will not move if the player does not have any logs. Once he steals all the logs, he will flee away from the player and never come back.

The old description was "Collect and use sticks to keep the fire from burning out!".

Authentic Mode is a secret mode found inside of the game. The mode makes the game look more "1999" according to the person who found it. It has only been found in V0.3.5. This then got reused in Classic Remastered as a secret code in the You Can Think Pad just like the TestRoom secret. The list of changes as of V0.3.7 are: 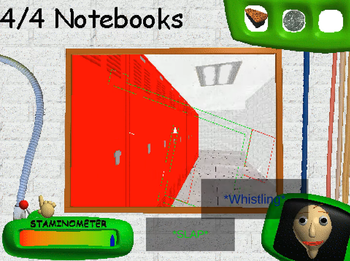 Three unused Baldicator heads that have existed in the game's files since V0.3.5. These are used in the bottom right corner of your screen when the player makes any type of noise. They later got implemented in Classic Remastered.

Arts & Crafters sprites got changed, the difference between them is that the sprite for BB+ is more white than more yellowish orange tinted.