Command & Conquer: Red Alert 2 is, quite obviously, the sequel to Red Alert and continues the timeline in which the Allies win. The Soviet Union has secretly recovered its army and takes the United States by surprise by invading it from all directions.

Red Alert 2 was developed on top of the Tiberian Sun game and engine, so a lot of graphics and programming code from the earlier game persists within Red Alert 2.

Side and Country Data

The Allies and Soviets are referred to by the sides system as "GDI" and "Nod" - the two main factions from Tiberian Sun. Unused country data also exists for "GDI" and "Nod" countries (using the gdii.pcx and nodi.pcx files shown below), either to just test the system, or possibly to later be converted into vanilla Allied and Soviet countries.

Some of the country names were also different to those employed in the final game.

Tiberium was the resource collected in Tiberian Sun, and came in two varieties - green and blue. These have been replaced by the more conventional ore and gems in Red Alert 2, in keeping with the original Red Alert. However, being built on the Tiberian Sun engine, most references to ore in rules.ini still mention "Tiberium", and control variables for the spread of ore and mining behaviour still have tag names such as "TiberiumFarScan".

In addition, ore is still referred to in code by the name of the standard green variant of Tiberium - Riparius. Gems have taken on the name of the rarer blue variant - Vinifera. Two unused Tiberium types that were present in the code of Tiberian Sun - Cruentus and Aboreus - are still present in Red Alert 2's code.

Tiberian Sun's super weapon code is still contained within rules.ini, though commented out for the most part. The Nod Multi Missile super weapon was adapted into the Soviet Nuclear Missile, and still bears the old name of MultiSpecial. The only Tiberian Sun super weapon not commented out in the code is the GDI Ion Cannon - IonCannonSpecial. Whether this was just an oversight or whether it was actually used for something is uncertain.

Re-enabling these super weapons is not possible without the use of modding extensions such as Ares, as although they remain in the INIs, much of their internal engine code has been purged.

Code still remains in the rules.ini, art.ini, and individual theater ini files for ice, tunnels and railways - all of which were present in Tiberian Sun. Without external enhancements like the Terrain Expansion, it is not possible to properly re-enable them.

Found lost in local.mix file, this music track can be found on the CD as background music called HM2. There are some differences like a different size and remixing smaller, besides being only mono track and 'low sound'.

This anti-piracy measure sometimes results in a false positive if you install the game, expansion and patch and play one game. Relaunching the game allows normal play.

An unused dialog box found in the main executable. 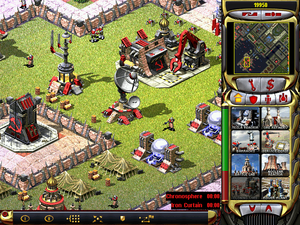 A test map used to show the full power of Red Alert 2, It was probably developed exclusively to be played at the E3 2000. This map appears in several old screenshots, including the cover of the game. You start with the Soviet team, but can also control the Allies even as enemies. The map does not have any goal. 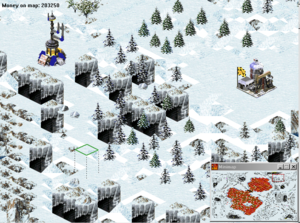 E32.map uses snow graphics and is a multiplayer map that is incomplete and missing graphics, most notably the water graphics. There is a psychic sensor on the map to Allied team. The map file is too corrupted to play, and can only be viewed in a map editor. It is possible to play it normally in Tiberian Sun.

List of names of the map file that does not exist in the file multi.mix.

The names exist but the maps are missing.

Are incomplete maps, exist but are not used.