The second of two SNES-exclusive sequels to Final Fight. Unlike Final Fight 2, this one feels more like a proper follow-up rather than just another version of the original, with various new play mechanics such as dashing, moonwalking, input-based special attacks, and even a super move gauge. Guy returns in this entry, fresh off his competitive fighting game debut in Street Fighter Alpha, giving SNES players who missed out on Final Fight Guy a chance to try out the Bushin-ryuu successor.

Hiding behind foreground objects, you can sometimes find a Yashichi item. The Yashichi icon has been used extensively in Capcom games, first appearing in Vulgus. You never get to see it fully in-game, although it can be seen partially hidden by a foreground object at the start of the sewer stage in Round 5, but it does have a specific sprite designed for it. It grants Invincibility on pickup.

Due to the black bars added at the top and bottom of the screen, in many stages details in the background are unseen to the player. Not all background objects have their top areas drawn however. 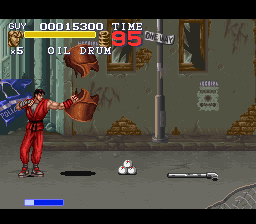 Using the Stage Select menu option "TR" (seen below) or the Pro Action Replay (PAR) code 7E1F032B, you can access a small debug area. It starts out exactly the same as stage one, but when you get to the first stop, there will be barrels. Each barrel will have a different object in it. Once the items cycle, each of the regular enemies in the game will appear, but one hit will defeat each of them.

Once you defeat the enemies, you're stuck here. Kinda neat to try out though. 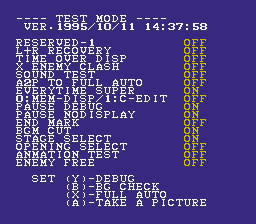 This game has a monster of a debug mode! To activate it, change ROM address FFA0 to 31 (or use the Pro Action Replay (PAR) code C0FFA031) and hold Select until the Capcom logo fades out. (This address contains the first digit of the game's last build date/time, as displayed in the screenshot. Any non-zero value will enable debug mode; 31 was used here for aesthetic reasons.)

For whatever reason, the European version of Final Fight 3 has the debug mode enabled by default, no changes necessary.

Pressing A, B, X, or Y activates one of four presets, which automatically sets appropriate debugging flags for certain tasks; for example, the "TAKE A PICTURE" preset (see image) would have been used to take screenshots of the game.

Each option corresponds to one of the 16 bits in RAM address 7E1F0A, starting with the most significant bit.

A number of ASCII error messages are sprinkled around the program code. All but one of them is preceded by 0000, which is a BRK (break) instruction, and some code paths do indeed end up here. Unfortunately, the only code at the BRK vector is a BRA (branch) that points to itself, effectively freezing the game. Presumably, if the game locked up during testing, the developers could trace the code back to the point where it broke and read the error message stored there.

The Japanese version is called Final Fight Tough and features a more spectacular title screen than the international versions, with lightning sparks coming out of the title logo.

As a consequence, the background of the option menu is also different.

Several enemies use different palettes in the international versions. Keep in mind that the same one enemy may use many different palettes, and these are only some of them. For instance this particular version of Andore only appears three times throughout the entire game.

The enemy "G" is black in the Japanese version and white in the international versions, for both his grey and green clothes variants.