Formula 1 Sensation was one of the only two FOCA/FIA licensed Formula One game (the other being Nigel Mansell's World Championship Racing) on the NES.

The game contains several codes which the game accepts, but actually do nothing.

At the title screen or while the game is paused:

Enter one of the following as the player name in Grand Prix mode: 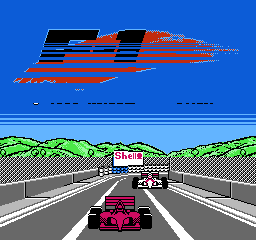 The Japanese version has its logo rise up and appear behind some lines. The European version shows the logo immediately.

In addition, the screen stays closer to the track in the European version.

A few sponsors were also changed between versions, due to these being considered advertisements for alcoholic brands. Curiously, the banner for Tio Pepe, a Spanish wine brand, was left untouched, while Iceberg, a fashion house brand, was inexplicably replaced with Castrol.

Despite being an officially licensed FIA Formula One World Championship product (complete with the inclusion of Ayrton Senna and Andrea Moda's original drivers, Alex Caffi and Enrico Bertaggia, as well as Giovanna Amati), three driver names are misspelled: