Gex 64: Enter the Gecko is a Nintendo 64 port of the PlayStation title, minus a large amount of content. 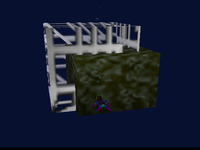 Outside the level borders of Gecques Cousteau, the Titanic level, a strange, green box partially inside a white cage-like box can be seen. It's behind the TV for the "swim through the arches" remote.

In the US version, Gex is voiced by comedian Dana Gould, but in the UK release, he's voiced by longtime British character actor Leslie Phillips instead. Also, probably because of the sound data being rearranged, there are a few oddities in Gex's introductions for each level.