This page details one or more prototype versions of Gex (3DO). 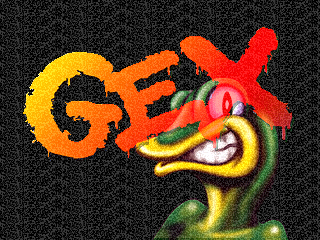 GEX Alpha is an early prototype of Gex for the 3DO.

The prototype seems to be similar to a build shown in footage from Crystal Dynamics' Sample This! demo disc, and slightly more different than another build seen in an attract reel from Star Control II. While there doesn't seem to be an exact build date, internal copyright text indicate it was developed some time in early 1994. It was originally included in a Russian compilation disc named 3DO Gamepack #1, made by MNEMO back in 2011. The ISO was then dumped and released 9 years later by GexGaming, with MNEMO's permission.

Present at line 216 of the file "gex_alpha" is a copyright notice:

The game immediately boots to this screen upon loading instead of the title screen. The font is pink and doesn't have its purple gradient yet, and there's an option to exit the game that isn't present in the final. BONUS levels 1 through 7 and GLUE2 don't have their labels yet. 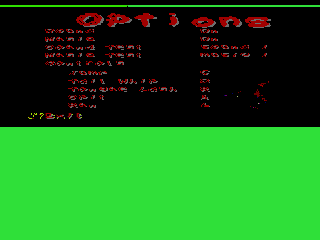 Attempting to exit this screen results in a very glitched-out version of the screen appearing and the game locking up.

Attempting to play any file results in the death animation playing. 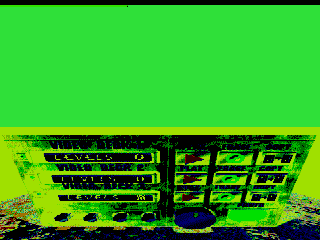 Attempting to exit here does pretty much the same thing as the Options screen.

While also never actually used, an early Results screen can be viewed from the Level Select. In the alpha, Gex walks in from the right, and starts spitting out and licking any power-ups that were reserved in the Gex-Ray for bonus points. Once it's done, he walks off to the left. In the final, bonus points are scored depending on the remaining Hit Paws and how many power-ups were collected during a level. After this, Gex makes a quip, and runs off to the right.

The alpha version used the same static as the early title and options screens. Rez is absent, and the frame is placed slightly lower, causing part of the background to be viewable at the top of the screen. The screen doesn't fade out from here. 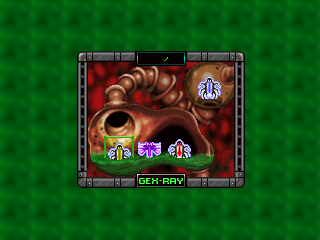 Despite the alpha's complete lack of audio, an audio file can be found in the game's data. It is titled "jnglbos.sng", and is a slightly longer version of the music that plays during the level "Jungle Gym" in the final game. The only notable difference is that the intro in this version is longer by a few seconds. The track loops once then fades out. Also of note is that this music file is in stereo as opposed to the final game having all of the music in mono.