Kingdom Hearts is a game where you play as a kid named Sora who is trying to find his friend. Did we mention that you get to fight Disney characters and Heartless with a giant key?

This area was planned to be used for a boss battle with Riku possessed by Ansem in the End of the World level. It was set to take place within the darkness-consumed Destiny Islands area between the other boss battles with Ansem. Because it was scrapped at the last minute, it can be found mostly complete in the game's data. The following code(s) will require you to hold R2 while loading a map to access it.

As seen in an early trailer, Disney Castle was originally set to appear as a playable world in Kingdom Hearts. The world can still be accessed via cheat codes, as areas of the world exist from the game's opening cutscenes. It was later made fully accessible in the sequel.

According to an interview, it was removed early in development because it was a place where only Disney characters could reside and is the complete opposite of End of The World.[1]

There are a few unused world icons inside "world.ps2".

This icon of Hook's ship never appears on the world map even when first going to Neverland, making it unused.

A version of Neverland's world icon without Hook's ship is present. The used version has Hook's ship on the bottom of it. 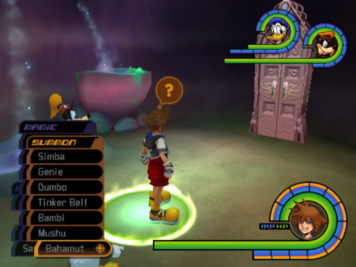 Bahamut from the Final Fantasy series was originally going to be a summon. The name can appear on the summons menu through hacking but attempting to use it will make the game crash.

The Japanese versions of the game (both the original and Final Mix) feature support for the PlayStation BB Navigator, or an alternate HDD, which allows one to install the game to the hard drive to reduce load times. After installing, you're able to choose whether or not the game loads data from the DVD-ROM or from the HDD upon starting a new game. Due to this feature being largely unknown and underutilized outside of Japan, the option was removed entirely for the international release.

However, the option can be added back to the main menu through hacking, or if a properly formatted HDD is detected, which allows the installation process (as well as viewing the exclusive animation to go along with it) to be performed on an international copy of the game. However, because the mode was never intended to be accessible in non-Japanese versions of the game, all of the related text is completely untranslated and uses garbage characters.

Present only in the Trial demo and initial Japanese release is the file 1d140a5d.bin with source code and printf functions. It was removed in later releases. It can be downloaded below.

Changes from the original Japanese to International versions

The Final Mix version retains all of the additional content added to the international release, as well as adding more content on top of it.