Kingdom Hearts II Final Mix is the Japan-only re-release for the same system, which contained bonus content. It was later released internationally as part of 2.5 ReMIX on the PlayStation 3, then later as part of 1.5 & 2.5 ReMIX on PlayStation 4 and Xbox One.

Note: This tool set can be used to extract the contents of this game, along with data-mining as well. The notes page has a more comprehensive guide and links to tools.

An early icon for the Megalixir, and an icon for what is most likely meant to be a Hi-Ether. 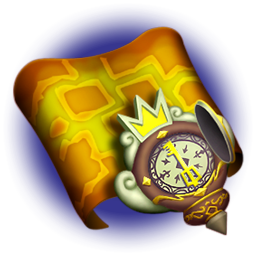 This might look like a regular map icon, but it's actually meant for a debug item! Note that both images are unused/early versions of the map icon. An HD version of the item's icon is present in the remastered versions.

The Promise Charm can be found among the other items Sora receives from Riku after the second visit to Hollow Bastion. It's description reads "A charm from Kiari. It represents her wish to meet Sora again, no matter how far apart they are." It is listed as a synthesis recipe.

An event tied to room zz0 (an unused version of The Usual Spot), an event was set to give the player the Cure element.

Among Tron's abilities, abilities called Slow 2 and Slow 3 can be found. Their descriptions read "{Delete}".

There are a couple of unused Keyblades in the game, called Edge of Ultima and Detection Saber. Interestingly, they have models and are functional, but their item icons appear as the icon used for maps. Both are modeled after the Ultima Weapon from the first game, only without textures, as well as Detection Saber being longer. They use the effects and sounds from the Oblivion Keyblade.

Additionally, there are equivalents for both Donald and Goofy, named the Staff of Detection and Detection Shield. They are usable and use a map image as their icon.

Goofy also has an unused shield named "Test the King", it is the "Save the King" shield from the first game only with a different name.

Though the descriptions mention being able to detect movement nothing seems to change when using any of these weapons.

There are some unused models that go by H_CM or N_CM, with CM standing for Chain of Memories because the models were used in pre-rendered cutscenes in the game. They consist of Sora, Riku, and several other characters that appeared in the first Kingdom Hearts game.

All of the Chain of Memories Organization members have unused weapon models. Additionally, an unused model of Ansem with his Guardian Heartless is present.

The Sora model contains unused animations from the the first game. Animations include standing, walking, attacking, jumping and grabbing ledges. 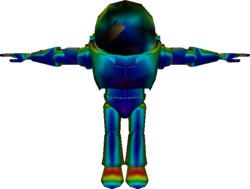 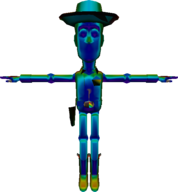 There are untextured models for Woody and Buzz from Toy Story, found alongside the other summons in the game. Their model IDs being the first ones on the summon list (P_EX300 and P_EX310, with Peter Pan, the first used entry, being P_EX330) suggests that these two were cut very early into development. Presumably thought to be excluded due to being a part of Pixar's trademarks, and therefore requiring a license from Pixar, they, along with others from Toy Story, would later be included within Kingdom Hearts III.

A Mushroom XIII model exists in all versions of the game. It has one test animation. In Final Mix, this model is the first in the list of Mushroom XIII models, but still remains untextured and unused. The Behemoth and Wyvern models (located in obj/M_EX310_NPC and obh/M_EX320_NPC) respectively. These enemies were shown in pre-release footage and have some of the lowest enemy IDs, however their models are suffixed with _NPC, meaning that these versions of the models were not intended to be fightable. These models contain animations with only one frame, which snaps them to the positions pictured above.

There is an unused, untextured Roxas model found at obj/N_EX380_BTL.mdlx. It is next to Roxas' cutscene models and labelled the same way as minor bosses (Hayner, Setzer, Vivi).

There is an untextured version of the main arena used in the Armoured Controller phase of the ending sequence found in obj/B_EX340.mdlx.

Castle Oblivion exists in the Hollow Bastion room list (ID: hb14) in all releases of the game. The ground has collision, and while the Castle itself is very detailed, it does not have any collision. It is likely this world was intended to be used in a cutscene of some kind in Hollow Bastion.

There are three .ard files in the game's data that have no associated map, suggesting that they were planned but never worked on or were deleted from the game at some point.

The player is placed in rooms zz47-zz49 during pre-rendered cutscenes in the final game, and as such these are not included in the table.

Note that the ZZ36 in the flag names likely refers to room ID zz36, which is called Test Map (テストマップ). These flags are all found in dbg/localset-zz.bin. Another file, dbg/mission-zz.bin, has many of the same flags, and two additional ones, "TEST_SKATEBOARD" and "TEST_YASUI". Yasui is the last name of one of the lead programmers of Kingdom Hearts I and II.

A third file, dbg/progress-zz.dbg (used as a way to label save file information for debugging), contains the following save flags:

Note that generic flags used in every world are not included in this table. While all of these are initialized when creating a save file, none of them are used.

There are several files in the /dbg/ directory, as well as a text string related to a world not used in the final game, with the 2-letter code "FA". The code "FA" was later used for the Fantasia-based Symphony of Sorcery world in Kingdom Hearts 3D: Dream Drop Distance, suggesting that a Fantasia world may have been originally planned for Kingdom Hearts II. It has also been speculated that the Mysterious Tower world may have originally been planned as a separate world instead of part of Twilight Town, and that this folder is a remnant of when it used to be separate. A file for story flags also exists for this world, but the flags are just copied over from the World Map or blanked in the remasters.

"The Girl from Madain Sari" from Final Fantasy IX

There is a music track in the data of Kingdom Hearts II that seems to be based on "The Girl from Madain Sari" from Final Fantasy IX. It is speculated that this would've played when you met Vivi as Sora. The song has no instruments, so it can't be heard in-game. This upload here uses custom instruments to allow the tune to be heard.

Also within the game's code, there is an unused, alternate version of "Lazy Afternoons" from Twilight Town that is more orchestrated. This is likely an early version of the theme and it is never heard anywhere in-game.

"Guardando nel buio", interestingly, is adjusted slightly to have a longer buildup to the main melody. Note that the rip on the latter has issues with instrumentation, as these play very similarly to counterparts from the original Kingdom Hearts in game.

"Oopsy-Daisy" from Kingdom Hearts is also present, but, like with "The Girl from Madain Sari" has no instruments, so it is unable to be heard in game. It's been given it's instruments from the original Kingdom Hearts in order to hear it.

In "/voice/us/battle" there are some unused voice clips in various character's battle voice banks.
Note: These audio files were ripped from the PC version.

Roxas has 3 unused voice clips, that only seem to play in-game when he's performing the "Call Over" reaction command. In the PC release, these voice clips are located at the very end of his voice bank.

Minnie has some unused damage clips for her escort mission. It's possible some of them may have played if you failed the mission. She also has an unused clip thanking someone, presumably Sora.

Scar has one unused voice file, for an unused attack.

Hades has various unused voice lines, stored in both of his voice banks (one for Hades Escape, one as a Boss). These voice lines consist of him taunting the party.

Xemnas has various unused voice lines during the final battle, when he's sitting on the throne and facing both Sora & Riku. It's possible some voice lines could've been intended to be used for a cut boss phase known as "King."

Found in "msg\us\wm.bar" is text for landing in places from the Gummi Ship on the World Map that can't normally be landed in.

"msg\us\gumi.bar" has some unused text pertaining to the Gummi Ship menu.

Changes From the Original Japanese to International Versions

Changes From International to Final Mix