The first in a long line of portable Kingdom Hearts games, where Sora ends up losing his memories after unexpectedly stepping inside a mysterious castle and is forced to play a tactical card game to fight his way out. It was remade for the PlayStation 2 as Re:Chain of Memories, and then ported to the PlayStation 3 as part of 1.5 HD ReMIX.

The CodeBreaker code 3203493C 0006 will enable quite an extensive debug menu in the US and JP versions, accessible following the opening cutscene. The options are as follows:

Additionally, a build date (04/10/01) formatted with the year coming first can be found at the top. The Japanese version, although being a slightly later version of the game, features the same date.

The CodeBreaker code 320348DC 0006 will enable a much more sophisticated debug menu than the US/JP versions, with the following options being added:

There is an unused Riku related cutscene, labeled "Dummy Crossroads", you can access in the EVENT section of the debug menu. After playing it, the game locks.
While this cutscene is available in every version of the game, only the Japanese prints out readable text, which is placeholder dialogue translating to "Crossroads scene movie." 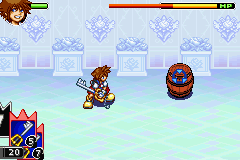 In the BATTLE section of the debug menu you can fight this stationary barrel which has a lot of HP to spend.

The song The Force In You has a wrong volume event which causes the first channel to be muted, leaving you with one less audible track. You can force that channel's volume not to mute and the music will play as it should.

Inside the ROM, there are several unused sprites which are likely placeholder graphics or were later changed.

A quick mock-up showing the differences in the two icons.

An unused "OK" icon in both unfocused and focused states. Menus in the game never ask you to confirm an action, so it is difficult to know exactly where this icon would have been used. Correct palette is unknown.

These appear to be floor tiles used during testing. The tiles are marked "0,0", "256,256" and "512,512" respectively to show field size. It appears a good portion of the tiles have been removed. Correct palette is unknown.

A simplistic block font with shading. Purpose is unknown, as is the palette.

When modifying your deck in the debug menu of the American version, a red (Attack) card with Captain Hook's icon and a map card description appears, titled "Card of Spades". Taking this card doesn't add it to your deck, however, it does still increase the number of cards you're holding. It also uses a lot of CP and crashes the game if you're curious enough to look at your deck after adding it. Looking at the other default decks also makes the game crash.

In the Japanese version, this card becomes a simple Kingdom Key card, although its effects are the same as the one above (minus the crashing). The other default decks don't make the game crash, but you can't really see their content.

In the European version, this deck menu correctly features all of the game's cards (allies included), so the odd, former one went unused. You can also check the actual cards inside the other two default decks, which are confirmed to be used for testing sleights.

The Japanese version has voiced dialogue, which was replaced with English voices in the international versions.