In Kingdom Hearts 3D: Dream Drop Distance, Sora and Riku take a test to become Keyblade Masters where they both dive into several dream worlds, befriend a herd of Dream Eaters for their arsenal and meet some friends from another franchise, while not realizing they're about to get into a bigger, complicated and rather confusing mess.

11 rooms for a world with the prefix "tp" can be found in the game's files. While 10 of these rooms point to the same placeholder area, one of the rooms leads to an empty void with a featureless and textureless pirate ship placed in the middle of it. Based on the pirate ship's presence, as well as the prefix of the world ("tp", other worlds in the series have used similar designations/abbreviations for their names, e.g. "hb" for Hollow Bastion and "tt" for Twilight Town), it's been assumed these are remnants of a world based on Treasure Planet that was cut from the game.

In addition, a Dive Mode map with the prefix of "jb" also exists, with the abbreviation implying that The Jungle Book world may have been intended for this game before getting a cut for a second time. World 00: Room 3C (999 Prizes) and 3D (999 Enemies) seem to be test Dive maps with the Timer maxed out. It is unknown if they are related. 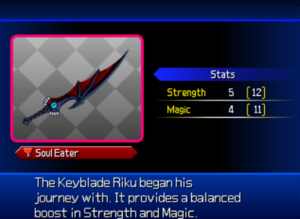 Soul Eater isn't normally available to use so it never gets seen normally in the menu to equip. It shares the same Keyblade stats and description as Way to Dawn. 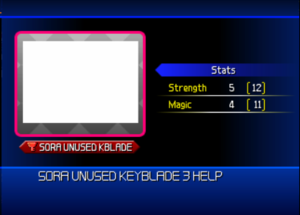 Sora has an unused Keyblade that shares the same stats and looks of Kingdom Key. It doesn't have any differences besides shown in the menu, however.

The Keyblade seen for link attacks in The World That Never Was can be equipped separately and even has it own unique keychain. Sora uses the light side while Riku's uses the dark side if they have it equipped. It has a extremely poor strength state but very high magic stat. It doesn't have any collision for attacking enemies however, but can deal magic damage. 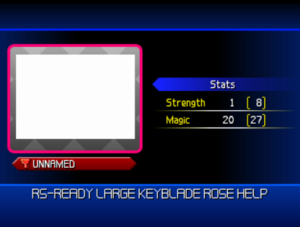 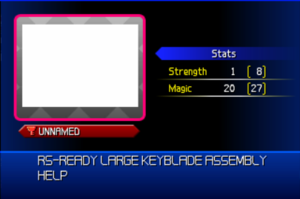 This Keyblade for the link attack mentioned above is both merged and is extremely huge that it goes through the floor and walls. It shares the same stats and does not have any collision mentioned above.

The battle theme for Kingdom Hearts II for The World That Never Was is in the game's music files, but goes unused. It may have originally been a placeholder for the world or was planned to be reused for the game at some point.