What do you get when you take out the Metal Gear from Metal Gear? You'll get the NES version of course. Since the MSX2 never reached North America, this was the version that was brought over instead, much to the dismay of creator Hideo Kojima, who had no involvement with it and would go on to disown it in later years.

The MSX2 version has two types of alert phases. The normal alert phases, in which a single exclamation mark appears above an enemy soldier's head, and the more dangerous kind, in which two exclamation marks appear. In these higher alert phases (which are also triggered if you walk into an infrared sensor, get spotted by a security camera or fire a weapon without a suppressor), enemy reinforcement will chase you from one screen to the next until you kill a certain number of guards or leave to another floor or area.

These higher alert phases are absent in the NES version, since the alert will always be canceled when moving between screens, but it's pretty clear that they were meant to be implemented. The game's NES sequel, Snake's Revenge, would manage to feature them.

The handgun icon for the weapon selection screen is displayed incorrectly in the Famicom version due to the wrong tiles being applied to the bottom portion. The tile intended for the middle-bottom portion was applied to the bottom-right, and the tile that comes before it in the game's data was used in its place. The intended design can be seen on the unused version above. The NES version ended up using a slightly different icon which has the gun aligned a bit more to the left.

The opposite is true for the flashlight icon, which was originally displayed correctly on the Famicom version but is slightly off on the NES version. The mistake is not as severe as it was with the handgun icon, though, as only the bottom-right tile is messed up.

There's a few leftovers from the MSX2 version that were not only kept in the game, but were fully translated for the English version too.

In the MSX2 version, Big Boss contacts you with this message instead of his usual one if you reach the entrance of Building No. 2 with the transmitter still in your equipment. This is because you're required to equip the enemy uniform in order to trick the guards to open the door for you. While it's possible to reach the entrance of Building No. 2 with the transmitter on the NES version as well, it doesn't trigger this message, and it's not as necessary to trick the guards either, since just equipping the enemy uniform will open the door like a keycard would on any other door.

In the MSX2 version, Schneider gives you this information when you call him one screen east from the northern elevator in the basement of Building No. 2 (where you fight Fire Trooper), but with slightly different wording (the MSX2 text used コノ/kono instead of ソノ/sono). The elevators in Building No. 2 only move in one direction, making the northern elevator (the one that goes up) the only way to leave the basement. In the NES version, the basement was turned into a separate base, Building No. 5, which is located in the west maze between Building No. 2 and 3. Since Building No. 5 has no elevator (Fire Trooper guards Dr. Pettrovich's cell instead), this message was replaced with an entirely different piece of advice. Despite this, the original message was not only kept in the game's data, but translated for the English version as well.

This is an incoming call from Big Boss that he makes when the player reaches the screen with the heat panels on the third floor of Building No. 1. This message was unused in the Famicom version, but the translated text ended up being used in the NES version. The Japanese text is mostly complete, aside from the omission of the "...OVER" text string that is used at end of each of Big Boss' radio messages.

The US version was the first game ever published by Ultra Games, a Konami imprint created to get around Nintendo of America's restrictions that only allowed third-party companies to publish five NES games per year, and thus the company's logo was replaced accordingly. A "TM" was also added next to the company and title logos, while the copyright text was expanded and moved below the main menu.

The European version changed the company's logo back to the Konami one, but the coloring is different from the one used in the Japanese version. The "TM" next to the Metal Gear logo was changed and the copyright text was simplified, removing all info pertaining to Ultra Games.

The icons for the handgun, remote control missiles, rocket launcher, and grenade launcher on the weapon selection screen were slightly polished for the NES version. The handgun icon in particular was not displayed correctly on the Famicom version due to the wrong tiles being assigned for the bottom portion, a mistake which was corrected on the NES version. The palette used for most of the icons was also slightly lightened (the separate palette that is used for the land mines and RC missiles was unchanged).

The icon for the bomb blast suit was recolored, giving it a bit of polish. The flashlight icon was also slightly redesigned so that it doesn't look like it's touching the antidote icon above it, but an incorrect tile was applied for the bottom-right portion. All the other icons on the equipment selection screen remained the same.

The radio communicator on the transceiver screen was given a much more complex design in the NES version. The word "TRANSCEIVER" was also recolored from gray to white and aligned a bit more to the top.

In the MSX2 version, when you reach the screen with the heat panels on the third floor of Building No. 1 (two screens south from the east elevator), you will receive an incoming call from Big Boss basically telling you to contact Schneider in order to find out where the remote control missiles needed to destroy the switch panel and proceed. In the Famicom version, this was changed to having Schneider himself call you and just outright tell you where you can find the missiles.

Since Schneider's frequency number is never given in-game during the first half of the game (you'll receive an automatic transmission from Schneider introducing himself when you set the frequency number to 120.79 in certain areas of the first floor or in front of the west elevator on the third floor, but nobody actually tells you to call that number), it is unclear if this was a deliberate change to help new players out or if it was just an oversight (as Big Boss' message is still present in the game's code in a mostly finished state). A gas-covered room on the same floor has an incoming call from Big Boss where he gives the player the same advice in regards to finding the gas mask, which went unchanged in the Famicom version. At any rate, the NES version simply changed it back to how it was on the MSX2 original.

The NES version changed some of the military vehicles stationed in the scenery and replaced them with civilian ones.

The password system used in the Japanese and American versions consist of an alphanumeric set of 32 characters (6 numbers and 26 letters). In the European version, the character set was changed by replacing all the vowels and the consonants C, F, and S, with additional numbers and symbols while rearranging them a bit. The cursor used to input the characters have been changed from a star to an arrow pointing upwards, since one of the added symbols happens to be a star as well. Despite this, passwords from Japanese and American versions can still be used in the European version (and vice-versa) by simply converting the characters.

This change was likely the result of a change in policy by Nintendo in order to prevent developers from creating passwords with profanities in them, as one of the passwords generated by the Japanese/American version of the game (which takes the player to the final boss battle with no weapons or equipment) consists of the phrase "FUCKME" as the first six characters, with the rest of the spaces filled with 1's. A similar change was made to the password system in Castlevania II: Simon's Quest. 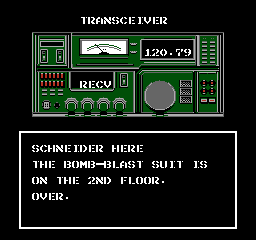 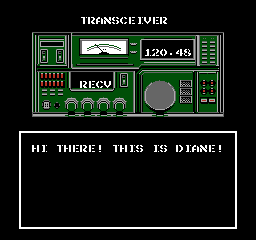 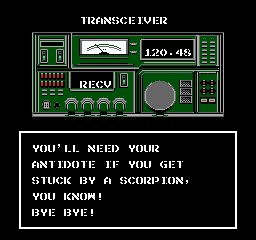 For some reason, you can contact Diane using Jennifer's frequency number on the southern end of the desert between Building No. 2 and 3 instead of using Diane's current number at that point (120.91). This was likely the result of a coding oversight. 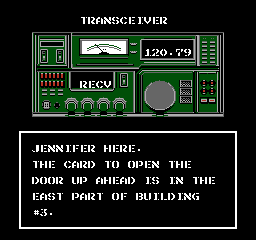 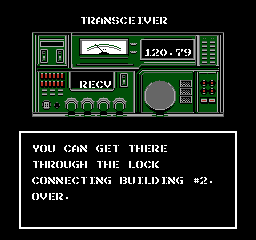 A similar oversight also occurs in front of the door with two laser cams in the basement of Building No. 3 (one screen west from the elevator). if you dial Schneider's first frequency number in that area, you will get an automatic transmission from Jennifer telling you where you can get the cardkey required for that door.

The NES version preserves the same screen-oriented messaging system used in the MSX2 version, in which the calls you get from your radio contacts are based entirely on the screens where they're made. However, because of the extensive level design changes that the game underwent during the porting process, some of the messages are now in places where they don't make much sense in context.