Snake's Revenge is the sequel to Metal Gear that was brought over to the west instead of the actual Kojima-directed sequel. In fact, it wasn't even released in Japan despite being made there. As a result, fans of the series tend to regard this as a misguided cash-in at worst or an unusual side-entry at best. Kojima himself did praise it a few times in interviews, or at the very least doesn't seem to mind its existence as much as he does with the first NES game. Unlike that game, they actually managed put in a few Metal Gears this time (mass-produced versions of the original mech in the first half, and a new prototype at the end), even though the mech's name isn't on the title anymore.

The text string "GAME" and "DEMO" can be found at offset 0x1D145, which seems to imply some sort of debug feature.

The logo on the title screen was updated for the European version to more closely resemble the one that's actually used on the game's packaging, featuring a slightly different, taller font, green text and lines going across certain letters (though its dropshadow is colored light green instead of the box art logo's yellow). Curiously, the coloration the American logo (with blue text and orange shadows) is the same that was used on the Metal Gear logo for the Famicom version of the first game (the coloring for the NES version's logo was different, as it featured yellow fonts with blue shadows).

Since the European version was published under Konami's own label instead of Ultra's, all the copyrights information regarding the Ultra Games branding was removed, allowing the programmers to move the main menu into the title screen (thus, eliminating the need for a separate screen).

Keen eyes may have noticed the big hole in the European logo next to the R. The correct tile is in the rom, it was just deleted from the tilemap on accident. Here's what it looks like with the tile restored. 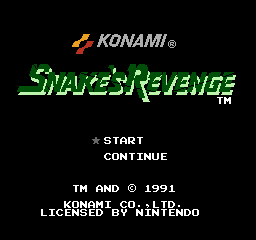