Metal Gear Special Disc is a bonus disc included with the Premium Package edition of Metal Gear Solid: The Twin Snakes exclusive to Japan. It's essentially the Famicom Metal Gear running on an emulator with a trailer for Twin Snakes itself as a bonus.

Hilariously, it contains a warning to players regarding Hideo Kojima's lack of involvement with the Famicom version before booting the game. 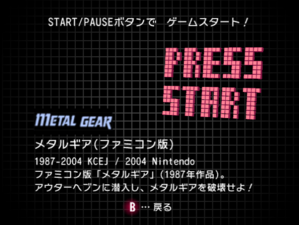 The tgc "disc" for Metal Gear actually contains a banner and text for the GameCube menu, much like the emulated NES games included in The Legend of Zelda: Collector's Edition. The banner is used on the game's save file, but the text doesn't appear anywhere else.