This page details one or more prototype versions of Lemmings (Amiga).

There were two pre-release demos of Lemmings on the Amiga with subtle changes and unused content compared to the final game. 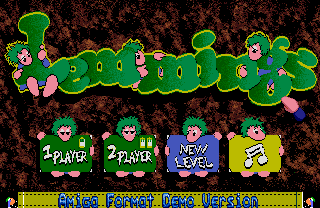 This was the first demo of the game that was released on Amiga Format magazine cover disk 18 and CU Amiga cover disk 8 in January 1991. This demo has animations missing that are in the other demo and the final game. The filestamp for the executable dates it to October 1990. This version does not start with the Psygnosis logo and the "rock" Lemmings logo as in the later demo, it starts directly on the menu screen. This demo has only three single player levels, unlike the later demo's five.

Watch out, there's traps about
Missing the final bear trap near the exit. This is, however, already present in the same level in the later demo.

This should be a doddle!
Uses a subtly different early rock graphic compared to the final. The left edge is completely straight and the bottom right extreme also angles upwards rather than downwards as in the final graphic.

This version has a unique map that is not in any other version of Lemmings, called "One way to Freedom", not to be confused with "One Way Digging to Freedom" as found in the previous demo and the final game. It has a similar concept to that map, overcoming a one way wall from the wrong side, but has a very different design. Presumably an early version or precursor to the final map.

This was released as a standalone demo disk by Psygnosis themselves, and apparently was sold for 50p at computer shows and also by mail, with the possibility of sending the disk in to get the money back if the full game was purchased[1]. It's commonly found on the internet as a cracked released by Skid Row. Unfortunately, there are no timestamps on the files to ascertain when exactly it was created. The near-final demo of the Amiga Lemmings has some small changes compared to the final game. Being a demo, it has no difficulty selection, instead presenting five preselected levels. Also, for whatever reason, the menu control for turning music and/or sound on and off does not work.

The menu also does not list Tim Wright as a musician because none of the songs he composed are included. 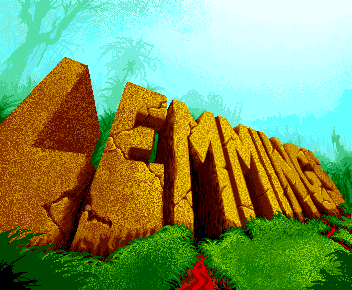 This version includes a title screen not seen in the final game. It was apparently kept for the game's still unreleased level editor[2].

One way digging to Freedom
Missing the flamethrower object to the left hand side of the final level and requires a slightly higher number of lemmings to be saved (100 in the prototype, 80 in the final).

Watch out, there's traps about
This is somewhat harder than the final version, since you have 120 lemmings (enough to cause the game to lag) rather than 80. On top of that, a slightly higher percentage need to be saved (88% in the prototype, 80% in the final).

If at first, you don't succeed...
As with "One way digging to Freedom", the only difference is that you have 100 lemmings instead of 80.

There are what are clearly debug strings in the demo executable:

It's not clear if a full debug mode could be enabled.

Included in the demo files are several covers of songs by Brian Johnston, none of which play in any of the demo's levels. All of these are covers of copyrighted songs; DMA Design apparently explicitly wanted covers of TV theme songs players would be familiar with for the game[3]. However, once publisher Psygnosis heard them they panicked at the obvious illegality of this and hired previous Psygnosis collaborator Tim Wright to compose several original songs to replace them[4]. Only Johnston's covers of public domain songs (e.g. The Can-Can) survive in the final release alongside Wright's new compositions.

Both demos show the same final message if all the single player levels are completed. The later Psygnosis demo fixes a typo on the screen, however.