It's the Genesis version of Lemmings, a puzzle-platformer starring a bunch of green-haired...lemmings. This port was hit pretty hard by the Genesis's technical limitations, resulting in a lot of earlier stages being squished and later ones being replaced entirely (some taken from Oh No! More Lemmings). To make up for it, there's two new difficulty ratings with 30 stages each and one Hebereke cameo, making this the longest version of the game by a good margin. 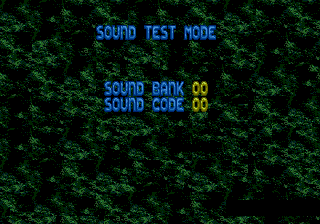 To operate the sound test, press Left and Right to cycle though Sound Bank numbers, Up and Down to cycle through Sound Code numbers, B or C to play the selected sound, and Start to exit.

Two test levels can be found still in the game. To unlock them, change the value at 00841BBF (Gens) to 31 (US). Completing the levels will give you a password, but they won't work. 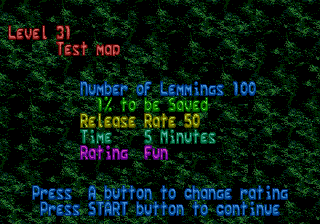 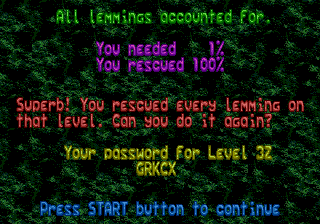 You start this map with 99 of everything. 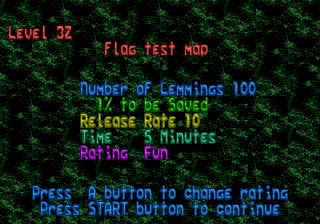 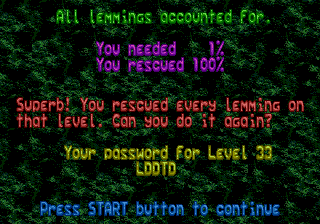 You start this map with 8 of everything. You can't collect the flags.

Due to the European version having a different publisher than the Japanese and US versions, various references to Sunsoft were replaced with Sega, hiding the fact that Sunsoft developed this port. This has also led to the copyright dates being redrawn and being assigned the palette of the Psygnosis logo to accommodate the palette changes.

The Sunsoft logo at the end of the credits was also replaced, and a palette correction was made to the lemming's eye, collar and sleeves:

Besides these, everything is the same; one of the difficulty ratings is still called "SUNSOFT", and the "SUNSOFT Special" level is still intact.

All the level passwords are different across all regional versions. Though the Japanese and US versions are the same ROM, the game uses a different password system which uses all 26 letters of the alphabet when playing on a Japanese console, while on a US console the password system does not use any vowels. This leads to the level passwords being different according to the console language (e.g. The password for Fun Level 2 is QWKYN on a US console, and NSHNU on a Japanese console).

The European version uses the same password system as the US version, but all the level passwords have been reshuffled (e.g. The password for Fun Level 2 is changed from QWKYN to WQHMN).