The SNES version of Lemmings is surprisingly faithful to the Amiga original, given the constraints of the SNES hardware. Too bad it predated the release of the SNES Mouse by about 7 months.

An unused exclamation mark can be found in the title screen graphics.

Hidden within the Sunsoft logo. The mascot from some earlier Sunsoft commercials was supposed to appear but was left unused in the final game. This graphic is also present (but still unused) in Hebereke's Popoon, Hebereke no Oishii Puzzle wa Irimasenka and the SNES port of Xak: The Art of Visual Stage.

Starting at offset 0x7749 in the US version, 0x7738 in the Japanese version and 0x7742 in the European version (right after the SUNSOFT SPECIAL 5 password) there is a set of 25 unused passwords, suggesting that the Sunsoft rating was originally planned to encompass 30 levels, as seen in the later Genesis port. The final game has only 5 levels.

Starting at offset 0x00ED93 in the US version, 0x00ED9D in the European version and 0x00ECF8 in the Japanese version, there are are remnants of a debug menu, likely used to quickly access various events from the game.

Edit offset x8C58F with one of the following values to replace the first level: 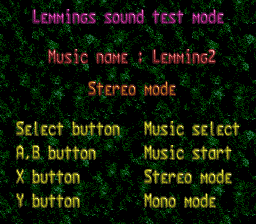 Hold Select and press Start at the title screen to be taken to a hidden menu that contains a sound test.

The Japanese version uses a full alphabet for its password system, whereas the US and European versions do not use vowels.

Tricky 21 is the infamous "All the 6's" level, which originally featured the number "666" made out of rocks. Along with the name change, the level itself was changed to spell out "ohayou" in hiragana in the English versions, and all of the 6-based level statistics (time, number of abilities, etc.) were changed to twos instead.

The level structure spelling out the word "heaven" was changed to "paradise", predictably.

The level structure spelling out the word "death" was changed to... "terminate"? Oddly, the "MAD DAM DMA" graffiti was left untouched.

The crosses in the dirt tileset were changed to signs in the US and European versions.

The Christian cross in the beginning of the level A Beast II of a level was changed to generic pieces of wood.

As usual, the Japanese and European versions uses the colored buttons while the US version uses the purple buttons.

The cutscene after completing the Taxing rating was changed. In the Japanese version, the last Lemming down the slide has the seat of its tunic thing chafed off, exposing its bottom and causing it to blush when it notices. In the international versions, it keeps sliding after it hits the ground.

On the exact-percent level completion message, "SPOT ON." was replaced by "Right on!" on the US release, may be to be more accurate to the DOS version, although it was reverted to "SPOT ON." for the European release.

Same for the required + 20 completion message, but this time, "to you on that attempt" was replaced by "for you".