This page details one or more prototype versions of Lemmings 2: The Tribes (Amiga). 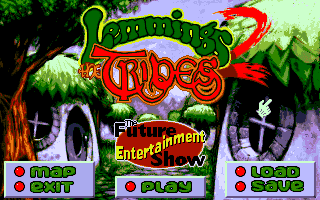 A pre-release demo with many interesting changes that was given away for free from the Psygnosis stand at the 1992 Future Entertainment Show in London, England, in November of that year. It's very similar to the later DOS demo, but quite revealing in the differences between the two. It can be downloaded from Aminet.

The executable for the demo is simply called "test".

The demo contains three levels, none of which were included in the final game: 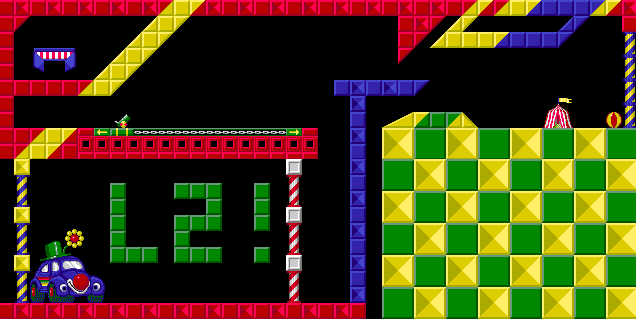 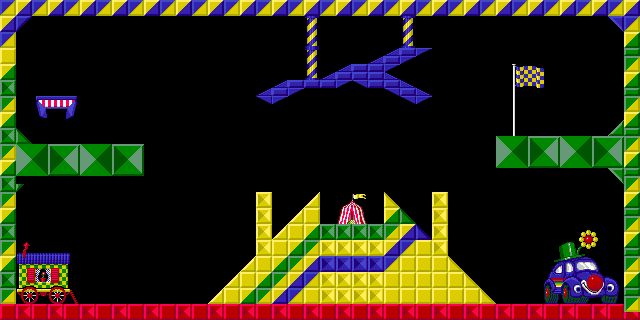 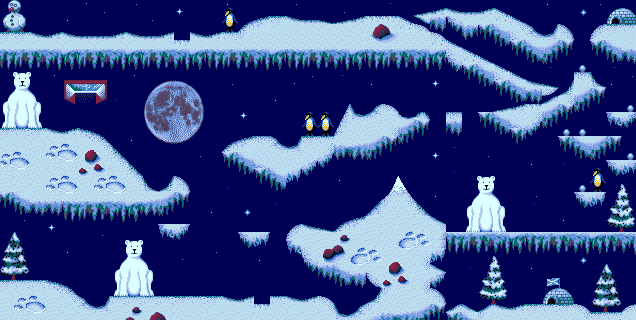 The DOS demo includes both the circus levels, but does not include the level "So Cool". Instead it features two unique medieval levels not present in the Amiga demo.

The Title screen has a different design. Each option has a red light next to it that turns green when clicked, a design that was removed in the final. There's also no practice option, but that may have been to fit in the Future Entertainment Show logo, or the fact it's just a demo.

The map screen is an earlier version. It's mostly the same, but missing much of the detail (and with different grass shading) in the circus lemming area, and the stadium in the sports lemming area is also in a much cruder state. It's also only a still image and not yet animated like the final map or the map in the DOS version of the demo.

The level selection menu is very different in both appearance and behaviour. A different font is used with all text in orange rather than the scheme used in the final game of green for skills and purple for level names. The tribe name/graphic is also a different set of graphics that look like poorly retouched scanned artwork that was completely redone for the final. There's also a different background pattern visible. Rather than the geometric patterns the final game uses, the demo uses the same textured background style as the original Lemmings. These were very likely generated by the same Hisoft Basic script created by Scott Johnston for the background patterns of the original game and the early versions of Hired Guns.

The current number of lemmings is at the bottom of the screen rather than at the top.

The preview window for the level is quite peculiar. The player cannot scroll their mouse cursor outside of this small window, and scrolling to the left or right edge advances to the preview of the next/previous level. In the DOS version of the demo, the skills list and name then updates to correspond with those of the selected level. In the Amiga demo this doesn't happen, and only the skills and name for the first level is ever shown.

This tileset varies greatly from the final game, with all the background light and striped bridge graphics yet to be added. It also has a number of tiles that go unused not only in the demo, but which were cut for the final game:

The up arrow is intriguing, as this was clearly intended for some kind of cut mechanism the player could interact with like the cannon. There are also some other tiles present that made it to the final game, but were unused there too.

There don't seem to be any obvious cut tiles in this set, but the odd unused ice tiles with orange scribble on them present in the final game are also in this version of the tile set. However, at this point in development they don't have the scribble on them. It seems therefore they were an early attempt at the ice tile, and once superceded by the later final ice tiles, were scribbled on to show level designers not to use the deprecated ones anymore. The elaborate ice machine trap graphics are also not present here, meaning they must have been made later, only for the trap to be relegated solely to the practice map of the final game...

In the demos, each tribe has a unique "nuke" animation. Instead of simply counting down from five and exploding like in the final game (and the original Lemmings), here they each have their own special death animation that plays instantly when the nuke button is pressed.

Circus - All lemmings blow up like balloons and then pop. The Amiga demo animation is actually different from the DOS demo. Here the lemmings inflate and pop on the spot, whereas in the DOS demo they float up a ways like an actual balloon before popping.

Polar - All lemmings melt as if made from ice while a unique sound effect plays. 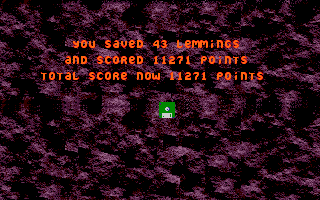 The game gives the player the "User" skill on several levels. In the DOS version of the demo, these would be required to make lemmings use the background objects (e.g. the cannon). Despite being an earlier release, in the Amiga demo it seems this mechanic had already been dropped. Oddly the player is still given users, only with zero actual uses of the skill, and objects like the cannon just work for all lemmings as per the final game anyway. This suggests the removal of the mechanic may have been a late decision before the demo was released. 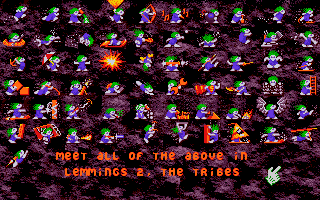