Scooby-Doo and the Cyber Chase (PlayStation)

Scooby-Doo and the Cyber Chase is a loose adaptation of the direct-to-video animated movie of the same name, and is pretty much a half-baked Crash Bandicoot-like game with pie throwing and awkward platforming.

T03.BIN has an unused boss mugshot of the Moon Ghost, who appeared in the movie's moon level. The level itself doesn't exist in the game.

TIT2.BIN is a leftover from the demo. 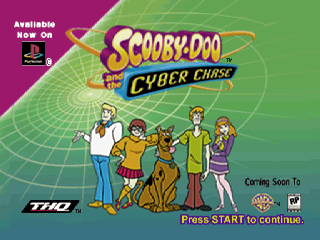